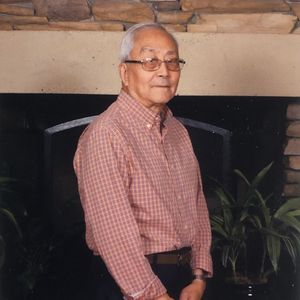 Grandpa, I miss you so much. Teach them how to properly dance up in heaven. See you in my dreams until we meet again. I love you.

Amicable and social are words that suitably capture who Guo-Xing Han was as a person. Born 6th in a family of 7 children, being in a lively setting had always felt natural to him. And so, throughout his life, he cherished being surrounded by family and friends. Guo-Xing would oftentimes bring out his radio, CD player, or Bluetooth speaker (depending on what year it was) to play his favorite songs for the crowd. Among his favorites were "Moonlight Serenade" by Glenn Miller and "Fascination" by Percy Faith.

It would be hard to talk about Guo-Xing's upbringing without talking about the historical events he grew up with. From his early to middle ages, he lived through the rise and dominance of communism in China. As an educated individual with an interest in Western culture, he detested the political climate he found himself in. Unable to emigrate and unwilling to leave his home, he found resilience in focusing on family and work.

Guo-Xing was dexterous by nature. His curiosity on how things worked and vision of how things could be led to a successful career as an engineer. While working as an engineer, he consulted on the construction of several factories in China. Guo-Xing was not one to sit back while the action happened. On more than several occasions, he'd happily join the construction team as they built the structures by hand. Even in his retirement, he continued to tinker with gadgets around the house, constantly making quality-of-life improvements for his grateful family members.

In 1960, he married the love of his life, Jing-Wen Xu, and had two children. Guo-Xing took care of his family in sickness and in health. His daughter immigrated to the United States in 1989 to pursue the American dream. He lovingly supported his son, however, tragedy struck in 2004 as his son met an untimely death from an accident. As for Guo-Xing and his wife Jing-Wen, they found strength in each other and were inseparable up until her death in 2011.

Guo-Xing moved to sunny California in 2012 to be closer with his daughter, son-in-law, and granddaughter. He bonded with his family through gardening, making authentic Chinese food, drinking wine, and traveling to new places. His fondest travel memories include taking a cruise ship to Alaska, dining in Michelin star restaurants in San Francisco, and feeling the white sand in Carmel-by-the-Sea. Over the years, he made many friends within his neighborhood and senior center. His family and friends are all too familiar with the slow waltz and foxtrot songs he'd play for them. While playing his tunes, it wouldn't be unusual for him to ask the ladies for a dance, and they would oblige him every time.

When the COVID-19 pandemic hit in 2020, Guo-Xing was disappointed he couldn't see his friends more, but handled it pragmatically. With a little help from his family, he taught himself how to write simple English and use social media and Spotify. Even while social distancing, he found simple pleasures in being able to connect with his friends virtually and stream music. As he patiently waited for the day he could see friends and travel again, Guo-Xing developed some health problems. The health problems required a surgery, which was heavily delayed as medical resources were scarce.

Three days after his surgery, Guo-Xing succumbed to complications and passed away in his own bed on March 15, 2021. He was 87 at the time of his death.

His legacy lives on in his daughter, son-in-law, and granddaughter - all who love him very much and are grateful to be his family.