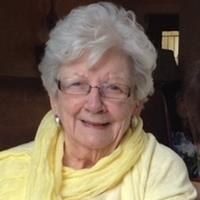 I am sadden to discover that Mrs. Condon left this world to be with Our Heavenly Father. She was an amazing women. An excellent role model of a Catholic Women. When I think of Mrs. Condon the first thing that comes to mind is her beautiful smile. She will be missed by many.

It saddens me greatly to hear of Mrs. Condon's passing. She was one of the finest ladies I ever knew, always sweet, friendly and upbeat. She lived the things she believed in, the Catholic Church, her friends and especially her large family who all adored her. I loved talking to her about the old days, her column in WWII, "The Girl You Left Behind," the College of Charleston, Condon's Department Store, Charleston in general. She was the matriarch of a great Charleston family and a...

Dear Condon Family, Aunt Harriett was an amazing lady with so many accomplishments. My thoughts and prayers are with each of you.

My condolences to all of the Condon family.

Francis, I am truly sorry for your loss. May God be with you and the family. With love, Dr. Luther M. Yon

Get email updates about Harriet Condon delivered directly to your inbox.

She was the daughter of John Celestin Molony, Sr. and Frances Igoe Deal. Harriet was born in Charleston on November 12, 1925 and grew up on Savage Street. She graduated from Bishop England High School in 1942. She earned her undergraduate degree in education from the College of Charleston in 1946. While at the College, she was a member of the intercollegiate swim team and Delta Zeta Sorority, Beta Psi Chapter.

She married the love of her life, James Joseph Condon, Sr., president of Condon’s Department Store, in 1949 at the Cathedral of St. John the Baptist on Broad Street. When Joe served in World War II, she authored a column, “The Girl You Left Behind,” in a local paper. Harriet and Joe spent their summers on Folly Beach, a tradition their entire family continues today.

Ever continuing to learn, Harriet returned to the College of Charleston and earned a Master of Education. She also attended the summer program of the Alumni College at the University of Notre Dame, from which her husband graduated in 1949.She pursued a career as a teacher and principal at St. John Catholic School in North Charleston, a small school on the brink of closure ahead of her tenure. With hard work, the backing of the Bishop of Charleston, and support of loyal staff, she revitalized the school so that it met the academic excellence and Catholic education standards prescribed by the Diocese of Charleston. Harriet retired from St. John in 1999. While the school’s mission has shifted since Harriet’s time there, it continues to help area students.

Harriet was involved with many organizations and charitable causes. She was privileged to attend three World Union of Catholic Women summits—in London, Guadalajara, and Washington. She was a member of the Cathedral Women’s Club, the Blessed Sacrament Church Women’s Guild, Theresians International, the National Council of Catholic Women, the Bishop England High School Alumni Association, the College of Charleston Alumni Association, the Irish Historical Society, and Roper-St. Francis Senior Advantage.

While Harriet’s contributions to the community are numerous, her most notable achievement was her family. She is the mother of ten children, grandmother of 28 grandchildren, and great-grandmother of 22 great-grandchildren. Widowed at 59, she showed remarkable resilience serving as family matriarch. In raising her family, Harriet emphasized the importance of faith, education, and love for one another, and the valuable lessons she has taught her family members are countless.

She is survived by Kendra Garrett, the most amazing caregiver and dear friend, who has become a treasured member of the Condon family.

The relatives and friends of Harriet Molony Condon are invited to attend her Mass of Christian Burial at Blessed Sacrament Church, West Ashley, at 10 A.M. on Tuesday, November 12, 2019, which would have been Harriet’s 94th birthday. The Rite of Committal will follow at Holy Cross Cemetery on James Island where her beloved spouse rests in peace. The family will receive friends from 4:30 to 7:30 P.M. on Monday, November 11, 2019 at the Cathedral of St. John the Baptist lower church, 120 Broad Street.