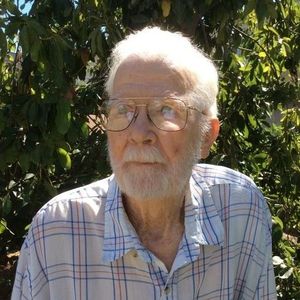 Harry Creighton Gibbens, Sr. slept peacefully at 4:34 PM on Friday afternoon, 26th of March at Kaiser Permanente hospital in Downey, CA from a congestive heart failure (CHF). He was admitted to the hospital ER on the day before for his complaining about two long months of breathing difficulty and frequent coughs. He was tested negative for COVID-19 at the hospital.

Note: The above photo was taken from his garden in front of an large avocado tree, right after his haircut on September 24, 2017.

Harry Creighton Gibbens, Sr. was born November 21, 1925 in Miami, Florida to John Gibbens and Margaret Trice. Dad grew up in Florida and then attended American School for the Deaf (ASD) in Hartford, Conn to receive a formal high school diploma in 1944. He was an extraordinary high school football player as a defense end. His opposing teams often wanted him to be injured on every game but never got one. Dad pursued his career in woodworking that was his highly specialty skillset. Due to slow woodworking business in Florida, he moved to California. Temporarily settled in Pasadena and found a long term woodworking employment in Alhambra as a Cabinet Maker and Shop Steward to oversee the building of fine high quality bank teller fixtures for many banks in the greater Los Angeles County area. Dad married to the love of his life, Edna Bennett from West Virginia in 1960. Brought her briefly to Huntington Park, CA. Finally, he settled in Lynwood, CA to become a lifelong resident. Dad was heavily involved with the city politics and ran for a city councilman with 70 votes but lost. However, he gained a lot of experience from it. He was involved with SELACO-Downey High School for Parent-Teacher Association (PTA) as a president to improve the education needs. Dad was called to be a Sunday School president for a long time at the Church of Jesus Christ of Latter-day Saints in the Deaf Ward (Los Angeles and Torrance). Dad was a TTY Museum Curator for displaying many different old teletypewriters (TTY) for the deaf communication at various events such as L.A. County Fair, Queen Mary, and Deaf Expo. During his free time, he enjoyed being a gardener to tend the garden by using his robust Troy-Bilt rototiller. He raised various vegetables and his favorite was the large jack-o-lantern pumpkins. He successfully raised those to nearly 300 lbs. and took them to the county fair for contest and won. Before the city zoning law went into effect in the late 1980's, he raised 24 chickens and brought eggs to feed to his family on a daily basis. Dad was a well respected person in the community.

Due to COVID-19 pandemic, there will be no funeral services during at this time. A Celebration of Life will be announced at a later time. Dad will be buried with his family in Forest Lawn Memorial Park - Hollywood Hills, 6300 Forest Lawn Drive, Los Angeles, CA 90068. Online condolences will be available at www.forestlawn.com/find.