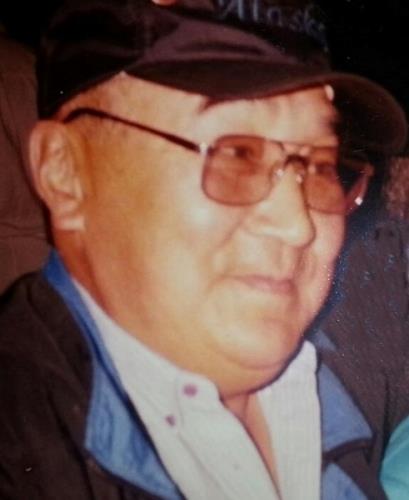 My prayers are with you all ,god comforts..may he rest in peace..may god place his hands upon the loved ones and comfort them..

I've known Herbie all my life and he never failed to make me laugh each time we meet- such a great sense of humor ! We will miss him too!

my condolences to the family. May God give you peace and comfort. Thank you for sharing such wonderful family pictures with him. They are now the lovely memories.

Thank you Herbie for raising us up as your best Reindeer Herders here at Deering,Springtime De-horning,women putting rubber bands on antlerless Reindeers,cooking,Men wrestling, Castrating Mavericks,Tagging ears,Kids helping with the Fawns most of the people stay up over 24 hours till your done was big herd several thousand and people would go Oogruk hunting right after their done,Butchering was a good gathering too in earlier days they use to save legs for mucklucks,people like me use to...

My condolences to your family.

May God Bless you & your family. My condolences & thoughts and prayers.

Rest in His heavenly peace.

Get email updates about Harry Karmun, Sr. delivered directly to your inbox.

Funeral services will be held 11:00 a.m. Monday January 11, 2016 at First Baptist Church of Wasilla, 900 Leatherleaf loop in Wasilla, Alaska. Bishop Roberta Thomas will officiate. Graveside services will follow at the Palmer Pioneer Cemetery. Military honors will be performed by the JBER Honor Guard Team. A gathering will immediately follow the graveside at the church.

Harry was born January 27, 1936 to Alfred & Mamie (Moto) Karmun in Deering, Alaska and raised in Candle. He married Alice C. (Gregg) on July 9, 1958 and together they had 9 children and adopted son, Jack. Harry served in the U.S. Army, Company B 208 Infantry Battalion until he was honorably discharged in August of 1960. He worked for NC Meat Market as a butcher in Nome, as an airport manager for the City of Deering and as a Reindeer Herder which was passed down to him from his Father.

He loved all his children, nieces, nephews and most of all his grandchildren and great-great grandchildren; and they all called him ‘DAD’ Also welcomed in their home Jerry, Gibson, Ron, Wyatt, Lila, Brian, Harold, Ruth Moto, Charlie Sheldon, Nils Gregg; brother and sister in-laws James Gregg, Fletcher Jr. and Thelma Gregg, Stan Anderson, Beulah and Percy Ipalook.

Mom would like to give a special thanks to all that helped Beep with Dad: Alfred Sonny, Agatha, Joyce, Dean and Allie Pearl when he had his heart attack and stroke. A big thank you to the Palmer Veterans Pioneer Home nurses and staff. All that called him Papa and treated him like family. Thank you to all that helped out the family in our time of need.

Arrangements were by the Valley Funeral Home. Please visit Harry’s obituary and online guestbook at www.AlaskanFuneral.com