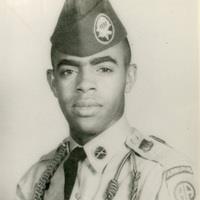 Fay and Ronnie my prayers and condolences goes out to you. Kenny was special to the Ford family ❤❤Love you. Debbie Ford and Lenarda.

To Constance Kenney and Family. As you walk
through this time of loss, please know the Lord
walks with you and He will comfort you.

To the Kenney & Robinson Family: May the loving memories you hold in your heart bring you comfort and peace. Rest in Heavenly Peace, Kenney, you will be greatly missed. Love & prayers to the family!

My deepest condolences to the family, especially Constance Kenney and Linda Jones.

To Ms. Connie and Ronald, I am so sorry to hear of the loss of your loved one. Please accept my condolences and know that I'll keep you and your family in my thoughts and prayers during this difficult time.
Rest in peace Mr. Kenny.

It was a honor to have served with Harry, he always called me his little brother. God bless all the family.

Get email updates about Harry Kenney III delivered directly to your inbox.

He devoted his life to Christ at an early age and was a lifelong member of Pilgrim Baptist Church in Roanoke, VA.

He graduated from the Historic Lucille Addison High School, Class of 1958, where he was known by his classmates and family as “Fatboy”. After high school, Mr. Kenney served in the U. S. Air Force where he was stationed in Paris, France. He furthered his military career in the U.  S. Army, where he excelled as an Airborne Ranger.

Mr. Kenney saw front line combat during the Vietnam War with the famed 101st Airborne Division known as the “Screaming Eagles.” He was severely wounded while conducting combat operations and returned home.

Mr. Kenney received an Associate’s degree in Computer Technology from ECPI. He later worked for Synoptic Systems as a Logistics Consultant and retired from Virginia State University.

He was a member of various organizations such as a 32nd Degree Mason with the Prince Hall Order, a Shriner with the Obelisk Temple and a member of the Veterans of Foreign Wars.