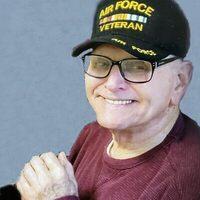 To the family of Jack. You have our deepest sympathy at this time. We have very fond memories of Jack from the times that we ate at King buffet. We always look for Jack when we went in and it wasn't the same when he wasn't there. Although he's gone he will always live in our hearts. Prayers are with all the family. Perry and Amanda and Micah Cunningham

I knew Jack from years ago, lived not far from him out on Rush Branch. He knew my parents from long ago. When and where ever he saw you he would always make an effort to talk. He had positive things to say about my parents and how good to see you again. Always had a way of making you laugh and have a good time around him. He will never be forgotten.

My heartfelt condolences to the family. Rely on each other and focus on the happy memories to get through this sad time. Thanks for sharing this photo - His smile is the same one I remember from over 50 years ago!

Get email updates about Jack "Buck" Buxton delivered directly to your inbox.

Jack Milton Buxton, “Buck” to his friends, 86, passed away peacefully on June 10, 2021 at Baptist Health Hospital in Corbin, KY.  He was a long time resident of Somerset, KY, and married Wanda Baker Buxton of Somerset, on August 6, 2011.  He was born on December 9, 1934 to Eugene Clay and Leona Gertrude Buxton of Lansing, Michigan.

Jack was a retired United States Air Force Tech Sergeant of 22 years, traveling many states in the USA, including South Carolina, Mississippi, Michigan, and San Antonio, Texas.  Among his travels, he was also stationed in Japan and the Philippine Islands.

Mr. Buxton was the father of Jacqueline Leona Buxton Lynch (Michael) of Frankfort, KY, Patrick Scott Buxton (Amy) of Knoxville, KY, Sheila Payne (Rick) and Valinda Hill, both of Somerset, KY.  He was preceded in death by his loving daughters, Kathy Sue Goguen (Ron) of Dover, DE and Bonnie Mills (Ronnie) of Somerset.  He was married to Edna Mae Goff Buxton of Somerset for 54 years.

Jack’s hobbies were jigsaw puzzle, reading, ice skating and roller skating, and music, both singing and stage acting while in the Air Force.  He was a lifelong friend to Doyle and Linda Mills, Benny Zow of King Buffet, Ernie Dearduff and Bobby Loveless.

His grandchildren remember Jack fondly as the grandfather who travelled to all of their homes for their ballgames, piano recitals, marching band, school programs, and symphony concert musical events in seven states.  Jack spent many years helping out with the Asian community in Somerset and was always the jokester of the group.  He was the uncle to many special nieces and nephews.  Jack was a very generous and kind man to all.

The last church Jack attended was the Rock Worship Center in Somerset with his wife, Wanda.  Wanda and Jack also attended the Potter’s Place in Somerset.  He loved to sing, and Bing Crosby and Dean Martin were two of his favorite Singers.

His funeral service will be held on Monday, June 14, 2021 at 11:00am at the Chapel of Lake Cumberland Funeral Home with Bro. Kevin Hampton officiating.  Burial will be at Burnside Cemetery. Military Honors will be conducted by the American Legion Post #38 Honor Guard.

You are welcome to view the obituary and send condolences to the family at our website:  www.LakeCumberlandFuneralService.com

Lake Cumberland Funeral Home is entrusted with the arrangements for Buck Buxton.