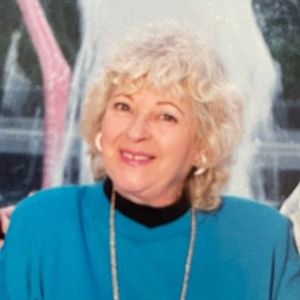 Jacqueline C. Lachina transitioned peacefully at home surrounded by family and love on October 15, 2021. Jackie loved life, music, parties, cooking, entertaining and showing off her kids playing music for any get together.
Born in Casablanca, Morocco, she was #5 of eight children raised by Judah and Miriam, assisted by older sisters and the first to migrate to the U.S. via France when she was around 15. Talk about courage. Leaving her homeland and family took guts. Jackie set out on an adventure to establish herself, earn a living and enjoy the wonders of this life.
She married an American G.I. (Eddie) and the couple became a duet act in a variety of disciplines, including acrobatics, dancing, roller skating and more, performing in Europe and throughout the U.S. She even toured with Ringling Bros for three years.
In 1959, Jackie met Andy and the rest is history (a lot of rich family experiences, good food and love). While pregnant with Phil, Jackie was cast in the original Ocean's Eleven as the woman dancing with the python in the first 15 minutes of the bar scene. That's our Mom, fearless. Jackie's daughters, Grace and Linda soon followed.
Jacqueline is survived by 3 children and their spouses, 6 grandchildren and their significant others, a great grandchild Serenthia, her sister Josie, her brother Emile and a bunch of nieces and nephews who love her very much.
Mom had a flare for enjoying whatever we were doing and loved having a family, possessing a real "Joix de Vivre" (Joy of Life) to which we say to each other, "Je t'aime beaucoup" which translates to "I love you very much." We see and hear her saying that to all who knew her. Jacqueline will be missed but never far from our hearts and minds as we share memories. God bless Jacqueline Lachina for the difference she made while she was here.