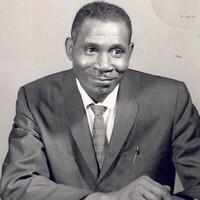 Get email updates about James Brooks delivered directly to your inbox.

His parents moved to St. Louis, Missouri to live when he was around seven years of age.  After his education, James worked for the railroad system while pursuing employment as a television repairman and as a certified automotive mechanic.  Then serving three years in the U.S. Army during the Korean War.

After the war, James met and married Barbara L. Gilmore, their union produced two daughters and three sons before divorcing in 1959.

James moved to Murphysboro, Illinois to continue employment with the railroad system then transitioned to the California Manufacturing Industries Company and served as a Floor Manager until he reached retirement age.

The Lord blessed him to find love again and he married Ms. Rosina Maria of Decatur, Indiana.  They had a new home built and they dwelt there until their passing.

During this time James became a member of the Shiloh Missionary Baptist Church where he worshipped the Lord for more than forty-five years, serving as a Deacon for more than three decades.