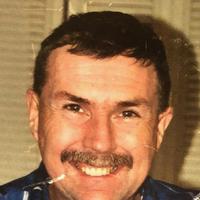 Get email updates about James Burke delivered directly to your inbox.

Butte has lost one of its most colorful native sons, and with his passing, one of its brightest SMILES. After years struggling with Multiple Sclerosis, Jim Burke died June 15, 2020.

James Garard Burke was born at St. James Hospital to Alice (O'Brien) and Emmett Burke on July 26, 1955. The baby of the family, he was welcomed into the world by his big brother Bob and his devoted sisters Peggy and Norine.

Jim was deaf and unable to talk. But that didn't mean he couldn't communicate. He greeted everyone he met with a huge grin,a handshake or by sign language. He was never without reams of notebook paper filled with written messages. He attended the School for the Deaf and Blind in Great Falls where he would do well in health and mathematics. Jim's life was filled with challenges. But he worked hard to meet every one of them.

He was an active participant in his community. As a young man, he took up the collection at his home parish of the Immaculate Conception Church. He would inherit his Brother Bob's mechanical skills. His garage at his childhood home on North Franklin Street was always filled with bicycles and bicycle parts. Many remember Jim riding his bike up and down Butte's hilly neighborhoods near the Anselmo Mine. Jim would later move to California, where he would spend 17-years with his sister Peggy and her family as they worked to help Jim become as independent as possible.

He visited several hearing centers in California. A hearing specialist in Los Angeles diagnosed Jim's disorder was caused from an incompatible Rh factor during pregnancy. He lived in group homes in California and loved his time spent building things in workshops for the handicapped. His brother-in-law Mike was a Los Angeles City firefighter and Jim relished visits to the fire station. Jim later moved to Helena for several years before returning to his hometown of Butte.

In 2001, he was diagnosed with MS and soon after had to use a wheelchair. He competed in Special Olympics, winning medals in the 25-meter motorized wheelchair slalom, bowling and basketball. His nephew D.J. Dixon's favorite memory of those games was Jimmy dancing in his wheelchair to the Village People's YMCA. "Jimmy and his fellow athletes were enjoying "life in the moment," said D.J. Shouldn't we all?

Jim's later years were spent at Sampson House, a group home within the AWARE program. "Jim Burke was the sweetest, meanest man I ever met in my life," laughed home manager Jennie Weldon. "He was always about happy smiles. He always made me laugh." Jim's niece Rosemary Jones, called her uncle "a social butterfly who always had to have the front seat in the car." "He always had to be in the spotlight," she said. "He was curious and always had to be in the know." His biggest advocate was his sister Norine, his "rock, his guardian angel."

If you ever met Jim he was your friend for life. For Jim, family and friends were everything. His nephew Bob Burke remembers how "every special occasion made Jim happy." The Butte Irish kid "loved Saint Patrick's Day and the Fourth of July," said longtime friend Knute Oaas. "He knew everybody. He was passionate about people. It was a privilege for anybody who had an opportunity to know Jim." Jim was always decked out in T-shirts and hats, covered with medals and pins from the Butte Fire Department. For years, firefighters welcomed him to the fire house where he was beloved as a buddy and the department's "biggest fan." "Jim was one of us," said friend and retired firefighter John Paul. "He was OUR Jim Burke. That's how everybody thought of him." "We were lucky to have known Jim and to have had him in our lives," he said, "Oh my God, he was a terrific guy." "Jim was a big part of our life," said Donna and Bob. "He was always there and he never left. He was never out of our sight." "Whenever he saw me or my kids," said his niece Debbie Burke, "he always had that infectious smile. I'll miss that." "Jimmy's best tribute was his smile and his laugh," said his niece Sis Hooten. "He loved being around people and going places, especially McDonalds. He will be missed." "He was a good uncle, and he was smart," said niece Mary Dorman "He wore his heart on his sleeve. He was a kind man." His great-niece Madison Jones said Jimmy gave her an appreciation to communicate, inspiring her to study sign in college. Jim had a "kind heart," said his nephew Dan Dixon. "No doubt, Jimmy's in Heaven where there's no wheelchair. He's hearing things that have never been heard, and speaking words that have never been spoken."

A Rite of Committal will be held at Holy Cross Cemetery in Butte, July 09, 2020 at 11:00 am Services will be celebrated by Deacon John Uggetti. God love ya' Jim! SMILES. There will be a further celebration of Jimmy’s life following services at the Cemetery. Duggan Dolan Mortuary has been entrusted with arrangements.