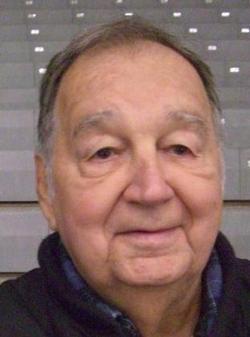 I am so sorry for your loss our families have a history that I will treasure always my thoughts and prayers with you all always. Love Karen

Our thoughts, prayers and condolences to the whole family. We are so sorry for your loss, and we send all our love.

Thinking of you on this hardest of days.

Tyler and everyone at Ring

Ray and Tammy
Our thoughts and prayers are with you.
We are so sorry for your loss.
Love
JoBee and Dom

Our condolences to the entire family. Love and prayers being sent out to all.

Nina and Family ~ so sorry for your loss. Let the memories and love of family help you through this difficult time.

Get email updates about James Clarke delivered directly to your inbox.

James Clarke passed away at Elmhurst Memorial Hospital on August 22, 2016 surrounded by his loving family. Mr. Clarke is survived by his children, James, Anthony (Laurene), Raymond (Tammy), Janet (John) Clarke-Platt, and Peggy (Steve) Sabatino; thirteen grandchildren; three great-grandchildren; two brothers, John (Judy) and Frank (Helene); and a sister, Charlotte (George) Baillie; and many nieces, nephews, great-nieces and great-nephews. He was preceded in death by his beloved wife of 58 years, Josephine, his parents, Raymond and Emily Clarke, his brothers, Raymond, Charles and Robert, and his in-laws, Michael and Carmella Esposito, Ralph Esposito, Nick and Eunice Umano, James and Julia Sylvester and Carmella “mulu” DeMartino. Beloved father, grandfather, great-grandfather, brother, uncle, and friend, Mr. Clarke devoted his life to his family. He worked at Western Electric in Cicero for over thirty years and has now gone to rest with his beloved wife, Josephine. Visitation Wednesday August 24, 2016 3 to 8 p.m. at Steuerle Funeral Home 350 S. Ardmore Ave, Villa Park, Il and where prayers will be said on Thursday August 25, 2016 9:15 a.m. followed by a 10:00 a.m. Mass at St. Pius X Church, Lombard, IL In lieu of flowers, donations may be made to Rush University Medical Center/Parkinsonism’s Programs.