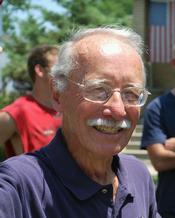 I was one of the "lucky" sophomores to have had Mr. Connelly for both geometry and U.S. history way back in 1977-78. I flourished under his strict style. We knew somehow that Mr. Connelly did what he did for our benefit. It helped that he was suppressing a smile about half the time when doing his gruff shtick. He more openly let upperclassmen in on the semi-joke, as I found out when I took his political philosophy elective as a senior.

Connelly Family,
I am so sad to read about the loss of your dad. What a great family you have. May your strength and love pull you through these difficult times. I remember having dinners at your house and amazed at all they great fun you had in your memorable house. Love and support to all during this time. Mrs. Connelly my prayers are with you as I am sure you have a wonderful support group.
Love,
Julie Tye Kelly

Pete and Monica, I was so sorry to hear. I just read your Father's obituary in the paper today. What a legacy he has left. My condolences to you and the entire Connelly family - Mary Kay Sarnowski

Sue, sorry Jinx(Connelly)& I missed the wake & funeral, but at 81 I miss alot. My memories of Jim are filled with dedication to his school. I don't know how you took care of all those kids on the Catholic salary. I got out after 9 years at LA, Fenwick & Ignatius. I just retired after 54 years teaching - the last 12 part-time. Hope you are doing OK,Sue. Iknow how empty my life would be without Jinx. Cas Kotowski

I only just heard the sad news and regret I was not able to be there in person and pay my respects. As a Stevens family member, our memories of Mr. Connelly go back to Our Lady Help of Christians and the wonderful community on the West Side.
On behalf of all us, rest in peace and know you lived a wonderful and blessed life

Kevin and family,
Great teacher and a great leader.I can honestly say the only reason I can help my own children in math/geometry is because of Mr.C. He had amazing ability to connect with every type of individual. I am not sure he ever used my first name after the first day of class as I was simply known as "Reynolds". Great memories and I am truly sorry for your loss.

Dear Connelly Family, My deepest sympathy to you for the loss of such a great man! An exellent teacher and mentor! He both frightened me and made me laugh hysterically, but never in class,of course. He taught me the meaning of respect. Decades after high school, his lessons resonate...Long Live Mr. Connelly! Molly Madden '86

Dear Connelly Family,
I was so very, very sad to hear of your loss. I remember Mr. Connelly so clearly in my mind's eye. Strict and warm, with a very clear love of his family and for those in need. You are all in my thoughts, in my heart and in my prayers.

You are all in my prayers as I add my condolences to those of many other admirers of Jim at this sad time. I was privileged to work with Jim for thirty years at Saint Ignatius where I witnessed his consistent commitment to the welfare of his students. He gave generously to all from a deep well of faith, hope, and love. I will always remember him with affection and gratitude.

Get email updates about James Connelly delivered directly to your inbox.

James Connelly, Devoted Teacher, Father of 16 and Hall of Fame Coach, Dies at 78James Vincent Connelly entered eternal life August 29, 2012 following complications from a stroke. He passed to eternal life surrounded by family at home in Villa Park, where he was a resident for 37 years. Born in New York City on June 13, 1934, Jim Connelly attended Regis High School and graduated from the University of Notre Dame with a degree in Civil Engineering and the designation of Outstanding Bengal Bouts Boxer in 1956.After his devotion to God and his family, Mr. Connelly's greatest vocation was teaching. His engineering career was short and he began teaching at De La Salle Institute in 1963. In 1967, he joined the faculty at St. Ignatius College Prep where he taught Mathematics, History and Political Science for the next 41 years and coached track and cross country for 23 years. He taught and coached nearly 10,000 scholars and athletes, including 59 state championship qualifiers. Jim was inducted into the Chicago Catholic League Hall of Fame and the Illinois Track and Cross Country Coaches Association Hall of Fame.Among his awards were the Joseph B. Whitehead Educator of Distinction Award, the Dei Gloriam Award from St. Ignatius, the Family Exemplar Award from the University of Notre Dame and several Educator of the Year Awards from St. Ignatius. He also served as the school board president at Our Lady Help of Christians School on the west side of Chicago and at St. Alexander School in Villa Park.In letters, emails and spoken testimony, scores of his students identified Jim Connelly as the best teacher they had ever had, and cited him as an inspiration in their lives.A devout Catholic, Jim and his wife Susan raised eight biological children, adopted seven more and were foster parents to several dozen other children. He is survived by his wife of 54 years, Sue (nee Shapley) of Gary, Indiana and by 16 children, along with numerous others who stayed in the Connelly home and called him "Dad." His children include Patrick, Susan Linville, Peter (Monica), Frank, Timothy (Kari), Kevin (Sarita), Thomas (Katie), Mary O'Malley (Timothy), Nora O'Hara (Michael), Terence (Reshelle), Jason, Christine Fallenstein (Thomas), Timothy Montgomery, Robert, James and Melissa. He is also survived by sister Irene Sullivan (Robert), brothers John (Susan) and Edward (Peggy) and 22 grandchildren. He was preceded in death by his daughter Tynia.A funeral mass of Christian burial will be held on September 1 at 10:00am at St. Alexander Catholic Church in Villa Park, Illinois. A wake will be held at St. Alexander's, 300 S. Cornell, Villa Park, IL, on Friday from 2:00pm to 8:00pm. In lieu of flowers, contributions may be sent to St. Alexander School Tuition Assistance Fund, 136 S. Cornell, Villa Park, IL, to Easter Seals, 830 S. Addison Avenue, Villa Park, IL or to the Pro-Life Action League, 6160 N. Cicero Avenue, Chicago, IL 60646.