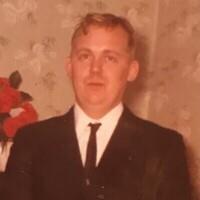 Jimmy was one of my favorite people. His sister and I were very close friends and Jimmy was a close friend of my brother Jim. I loved his kindness and humbleness. You will be missed Jimmy.

My awesome uncle! jimmy taught me how to tie my shoelaces; babysat for me; and also drove me go Seattle, to live with my dad after I graduated from HS!

He also paid my bus ticket to get back to ND when things went bad!

We went to Cando School together. The Jorgenson family name has been associated with Cando for many years. Many of us had our pictures taken at Jorgenson Studio years ago. My sympathies to Jimmys family

We are so sorry to hear about Jimmys passing. He was a good guy. Our prayers are with the family. Phil & Judy Deplazes.

Sorry to hear of his passing. Sympathy to family and friends.

Get email updates about James "Jimmy" Jorgenson delivered directly to your inbox.

James “Jimmy” Jerome Jorgenson was born December 12, 1940 in Cando to Jorgen and Olga (Wick) Jorgenson.  He served in the North Dakota Army National Guard for 3 years in Cando as a Combat Engineer from 1956 to 1959. He joined the United States Navy in 1961 and served as an Aviation Electronics Tech (Navigation) for over 4 years and received an Armed Forces Expeditionary Medal, National Defense Medal, and Expert M-1 Rifle Award for his service.  He received an honorable discharge. He also worked at the shipyards in Seattle in the 80s helping to repair electronic components and spent some time working as an electrician in the Beulah Plant. He also worked various jobs in Cando.

James was predeceased by his parents; brothers, Floyd, Arnold, Norman, and Stanley; and two infant brothers.