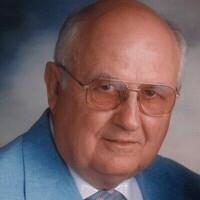 Rhonda and Jill, I am so sorry for your loss. I will keep you and your families in my thoughts and prayers.

Rhonda, We are very sorry to read of your fathers passing. Our condolences to you and your family.

May your hearts soon be filled with wonderful memories of joyful times together as you celebrate a life well lived. Rhonda sorry for your loss

Jim was a wonderful old neighbor who shared his love for bingo with friends In the neighborhood. He loved to play and loved to win. Precious memories were made as we battled our way to BINGO. Rest In Peace Jim You will be missed.

Thinking of the Knight and extended Families
God’s Speed.

Oh sorry to hear of Jim’s passing! I miss not seeing him and Ann since retiring!
Two wonderful people! Our dad enjoyed Jim working with him at RMC they had some good years! I enjoyed
Cutting his hair! Maybe I will be honored in Heaven to spruce him up
Once in a while! Bet Ann and his daughter will Be glad to see him!!
They can rejoice and sing hallelujah
Together!! Sorry Rhonda and Linda
Always hard for our parents to go!!!
Love you t

My Uncle Jimmy was such a warm, gentle and guiding soul. As a young boy I recall being in his shop with him, and while visiting from Iowa, experiencing such love from him and Ann. What a wonderful man! He is now in the embrace of the Heavenly Father along with his sister Lois, my mother.

Such a beautiful tribute to a wonderful man. My thoughts and prayers to the family.

Get email updates about James Knight delivered directly to your inbox.

James Merrill Knight, 90, formerly of Attica, was called home on the evening of January 21, 2021 at Ascension St. Vincent Williamsport Hospital.Jim, as he was known to family and friends, was born on July 9, 1930 in Earl Park, Indiana to the late Rev. James W. and Anna (McKee) Knight. Jim grew up in west central-Indiana, attending six different schools, and graduated from Perrysville High School in 1948. He studied electronics at Valparaiso Technical Institute, graduating in 1954. It was while living in Perrysville that Jim met the love of his life, Elizabeth Ann (Jackson). Jim was married to Ann by his father on June 23, 1951 in Perrysville. He and Ann moved to Attica in the mid-1950s and lived there until moving to Williamsport in 2007.Jim was drafted into the U.S. Army and deployed to Korea in 1952 where he served as a telephone lineman. After receiving an honorable discharge the following year, Jim enrolled at Valparaiso Technical Institute where he studied electronics. Jim then put his experiences to work at Radio Materials Corporation in Attica. He would work at RMC for 38 years, until his retirement in 1993.Jim was an active member of the Attica-Williamsport Evangelical Presbyterian Church where he served as both an elder and trustee. He was an accomplished craftsman and enjoyed woodworking and tinkering in his shop. Jim also enjoyed spending time outdoors, particularly in his garden and in the woods of west-central Indiana. He would routinely take time off in the spring to hunt morel mushrooms and would pick black raspberries in the summer to bring home for Ann’s famous raspberry pies and jam. Spring and summer was also a time to watch the Chicago Cubs. His love of the Cubs was something he shared with his son-in-law and grandson, and was finally able to celebrate a Cubs World Series Championship with them in 2016. In 2017, Jim participated in an Honor Flight (one of the last from the Purdue University Airport), flying to Washington, D.C. to visit the Korean War Memorial for the first time. Family was also of utmost importance to Jim. He and Ann hosted many extended family gatherings over the years, and it was a rarity that they ever missed their two grandchildren’s events. Jim leaves behind his loving daughters, Jill Knight of Indianapolis, and Rhonda (Dr. Jon) Inman of Williamsport, as well as two beloved grandchildren, James of Indianapolis and Christine of Brownsburg. He was preceded in death by his parents, James W. and Anna (McKee) Knight; his wife of nearly 68 years, Elizabeth Ann Knight; a daughter, Linda Gail Knight; and three siblings, Lois (Paul) Stuart, Frances (Harry) Webb, and Wallace “Wally” (Dorothy) Knight. The family would like to thank 6 very special caregivers that provided exceptional care and love to Jim and Ann the last 5 years; Janett Toosley, Jeanie Bildilli, Teresa (Pat) Barnett, Deby Pickett , Lisa Beighley and Cheryl Campbell.In light of the ongoing public health emergency, calling and a celebration of life will be postponed until a later date. Burial, with military honors, will be at the Hicks Cemetery, Perrysville.Memorial contributions may be made in Jim’s memory to the Attica-Williamsport Presbyterian Church, 300 E. Main St., Attica, IN 47918.