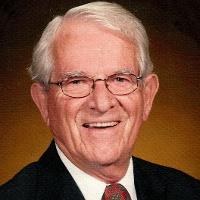 I was sad to hear of Rev. Morin's passing. He and Rosie were friends with my parents, Paul and Kathleen Honan. He spoke at both of their funerals, which our family greatly appreciated. This world has lost a wonderful man and pastor, but Heaven must be rejoicing. My condolences to all of his family and friends.

So sorry to hear of your loss Becky. Our thoughts are with you today.

A truly inspiring and amazing man. We will miss his vibrant personality. May God be with him as he starts his next journey.

We will so miss the humor, wisdom, and friendship of this special man who touched so many lives in so many different and meaningful ways. God's children in heaven have found a true believer and friend this day. May he spread his joy with all who encounter his wisdom. It is our loss, but the memories will live on with many who had the opportunity to know him. May more joy than sadness fill the hearts of those who loved him most.

Such a kind, Godly man, demonstrating his heart and love of God in everything he did. He married me many years ago and while sadly the marriage did not work out, I have beautiful memories of the day and of him. Sorry for your loss.

A wonderful gentleman, who will be sadly missed by his many friends and family. We truly loved visiting with Rosie and Jim while they lived with us at University Place. God has received another angle.

Rev. James Morin led an exemplary life in every respect. He was a good friend to us when he resided at University Place. Heartfelt condolences to family and friends. Channing and Janet Blickenstaff

Get email updates about James Morin delivered directly to your inbox.

James graduated from Honey Creek High School in Terre Haute and Indiana State University.  He received his master’s degree from Indiana University and a Doctor of Divinity from Garrett Seminary.  He was a veteran of the Army serving in WWII.

On June 25, 1944 he married Rosemary Cowan in Terre Haute and she preceded him in death on June 3, 2012.  Jim then married Eileen Chamness in West Lafayette on October 28, 2012 and she survives.  Jim was a Minsiter for United Methodist Church serving for 60 years.  He altered his manner of witness from speaking from the pulpit to writing the written word.  He was a member of First United Methodist Church in West Lafayette.  James enjoyed woodworking and writing.