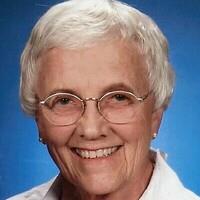 Thinking of you. Sorry for your loss.

Dr. B., Bruce, Brad, Beth & families~ We send our sympathies to all of you at this time. I have the fondest memories of Jane... since middle school days. She was always warm and generous in her spirit and elegant in her manner. I told Brad that when his mother was in her Nordic Fest bunad, she reminded me of Julie Andrews in the "Sound of Music". Her obituary is lovely... I hope you are comforted by great memories. Take care, Ann & Dan Mansfield

Our condolences to the Bullard family. Thoughts and prayers are with you all. -- Kay, Jerome, Nikki, and Rene' Donlan

Jim and Family
My condolences to you and your family.
Jane was a wonderful person, she will be missed.
Stephanie Pirscher

Dear Dr. Bullard,
I am sorry to hear of Jane’s passing. I know you have so many fond memories of your life together. You and Jane were such gracious hosts. I always enjoyed our dinners with you. I also so appreciate how you Jane welcoming us to Decorah. May her memories warm your heart each day.
My sympathy,
Tracy

From the first time I met Jane until the last time I saw her, she was always so gracious, kind, and welcoming. Her face lit up when we realized I had known her son Brad and wife Alicia from my time living in Winona; she loved talking about her family. Tony and I extend our deepest sympathy to the Bullard family; we hope fond memories will help bring a smile to your faces - Jane surely brought a smile to ours.

Our sincere sympathy to Jane’s family.

So sorry for your loss Brad. Thoughts and prayers for all of the Bullard family.

Get email updates about Jane Bullard delivered directly to your inbox.

Jane Katherine Anundsen Bullard, 87, passed away in the early morning of February 13, 2021. Over the past several months she dealt with a series of health issues with quiet courage and grace, including finally, Covid-19. She had most recently been a resident at Barthell Eastern Star Nursing Home in Decorah.

Memorial Services be later in the spring at Decorah Lutheran Church.

Jane was born on March 6, 1933 to Brynjolf Bjorkholt Anundsen (B.B.) and Doris Ellen (Killen) Anundsen in Decorah, IA. Jane graduated from Decorah High School then went on to the University of Iowa where she graduated with a degree in sociology in 1955. She was a member of the Delta Gamma sorority and also the Iowa Highlanders drum and bag pipes corps.

Following those travels, Jim and Jane moved back to Decorah to start their lives together. While Jim grew his medical practice, Jane started the daunting challenge of being a loving wife and mother of three children, while excelling at being a trusted friend to many, and valued and enthusiastic member of the community. Jane was the consummate mother who was instrumental in allowing her children to grow up in an idyllic life situation. She was involved in PTA, she was a Cub Scout den mother, part of the Decorah Kilties auxiliary, Winneshiek County Hospital Auxiliary, a member of Monday Club, and served on the Nordic Fest board, including being chairperson in 1991. Jane pursued her interest in art by taking classes at Luther College, learning rosemaling and creating stained glass pieces. Her talents in the kitchen were also enjoyed by many as Jim and Jane enjoyed entertaining friends with memorable gatherings that filled their home with laughter.

Jane led her family into activities by example. She was an avid skier, golfer (who had a hole-in-one at Oneota Golf & Country Club on hole #11), backpacker, tennis player and bicyclist. Jane and Jim and the kids travelled extensively, usually to go skiing or backpacking, and almost always to the mountains. For decades, they had a vacation home in Steamboat Springs, Colorado which became a continual source of togetherness for the family and created the opportunity to develop many deep and valued friendships. There was never a bigger smile than first tracks under a bluebird sky on a powder day. Jane and Jim were members of the “Over the Hill Gang” in Steamboat Springs. Jane and Jim were both certified scuba divers and did many ocean dives.

Jane was preceded in death by her brother Jack Anundsen on July 25, 2019 and their parents, Brynjof Bjorkholt Anundsen on August 8, 1984 and Doris Ellen (Killen) Anundsen on September 4, 1986.