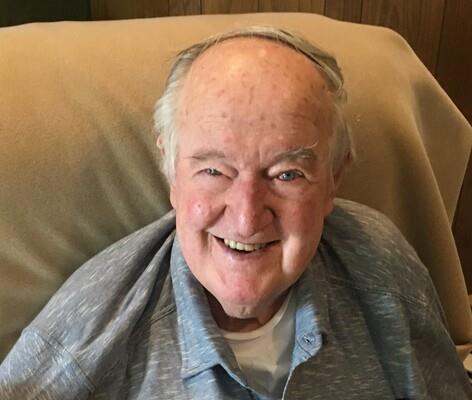 My deepest sympathies to the family of Judge Whelan. I remember him as a fair judge and a kind, friendly man. Butte and Butte Central has lost a great supporter.

Jill and I would like to offer our sincere sympathy to the whelan family. Jack was a good friend and a better lawyer. Our prayers are with you

MR WHELAN ALWAY"S HAD A SMILE AND A KIND WORD. I WAS PRIVILEDGED TO CALL HIM MY FRIEND. IT IS WITH A HEAVY HEART AND HUGE TEARS TO HEAR OF HIS PASSING . MR WHELAN WAS TRUELY ONE BUTTES LAST GENTLEMEN. MY PRAYERS AND DEEPEST CONDOLENCES !!

Get email updates about John "Jack" Whelan delivered directly to your inbox.

Dad was deeply rooted in his Catholic faith. As a young boy he was an altar boy and sang in the boys’ choir. He taught catechism for more than 15 years, was a lector and served as a eucharistic minister at St. Ann’s and Holy Spirit parishes.

Dad enlisted in the Marine Corp in January 1950, completing boot camp in San Diego and combat training at Camp Pendleton. In November 1950, he shipped out to Korea serving in the 1st Marine Division (as a staff Sargent), an artillery arm of the Marines. Dad returned home in December 1951. He was honored to serve his country and was a proud Marine.

He met the love of his life Roberta (Bobbie) Eleanor O’Connor on December 30, 1954 as she was walking across Park Street with fellow nursing students. When they crossed paths just outside the Cherry Bar, he offered to buy her a drink. She told him she didn’t drink so he said – “then will you marry me”! Dad asked mom out on a formal date the next day and they celebrated New Year’s Eve dancing at the Rose Garden. They were engaged later in 1955 and married September 1, 1956 at the Immaculate Conception Church in Butte.

Their first five children (Joan, Kathy, Mary, John and Janet) were born while working and going to college. He said his friends kept getting new cars and he kept getting new additions! After graduation, they made their home in Butte and soon welcomed their youngest son (Bob) to complete their family. They celebrated 64 wonderful years of marriage!

Dad started his law career with Burgess, Joyce, O’Leary, Prothero and Whelan, P.C. His practice continued for 29 years welcoming young attorneys in as the original partners retired. In 1983 Dad was appointed a parttime U.S. Magistrate Judge for the District of Montana and served until 1992. His son Bob joined the practice of Burgess, Joyce and Whelan, P.C. in 1993. Dad was elected District Court Judge, taking the bench January 1995. He served in that position for 12 years retiring in December 2007. The Montana Supreme Court called him out of retirement for the specific purpose of swearing in Bob as he took the bench in 2019. It is our understanding this was the first time in Montana history a father presided over his son’s swearing in ceremony.

Dad was a skilled handball player competing with some of the best players in Butte and across the state. Whether playing singles or doubles, it was a chance to compete with good friends and respected competitors. Dad loved to golf, and we found he really was a morning person if it involved golfing! In 1968, Dad resurrected the Legion baseball program. Together with the help of good friends like Jim Hanley, Frank Kinsella, Jimmy C. Davis and Jack Cavanaugh they ran the Miner and Mucker programs for nearly 50 years. He also served as a State Commissioner of Baseball.

Dad received many acknowledgements and honors over the years from various organizations whether through his law work or his volunteer work. He was honored and humbled by each one. He was inducted into the Sports Hall of Fame in 2005. The dedication of Three Legends Stadium honoring Dad and his buddies was a shining moment in his life! This past year, Dad along with the family were honored by Special Olympics Montana.

Dad was a humble man. He never took things for granted. He had an unending drive to help others and be involved. He volunteered and was an active member of so many organizations including the Elks, American Legion, Kiwanis, Special Olympics, Montana Amateur Speed Skating Association (MASSA), Ancient Order of Hibernians, the Marine Corp League, Butte Central and VFW. He believed if we all do a little, we can achieve great things. For years, many of our friends never knew he had a law practice as they just knew he was always driving the bus whether for Legion baseball, Butte Central events, or speed skating trips to Canada. He loved Butte and all it had to offer families especially the youth of this town. It was one of the reasons he volunteered at so many events and stayed an active member of so many organizations. Dad served on various boards and committees for Butte Central including the Education Foundation. He was a member of the MT Tech Local Executive Board. He also served as a board member for the Butte School District including one year as Chairman of the Board.

Whether a music competition, an athletic event, drill team, celebrating a sacrament at church or selling candy for speed skating, Dad was there. This continued with the grandkids with football, swimming, soccer, wrestling, dance, orchestra or band concerts, or an awards night. Dad loved his family and welcomed each new addition (as well as their extended families) with open arms and a loving heart.

Dad was an avid storyteller. He had so many memories to share, we wish we had recorded them to be sure we could pass them to the next generation. When he got together with his sisters, so many wonderful stories would flow. Dad had a knack for making up silly little “diddlies” and singing them to the kids and grandkids. He knew how to make you smile!

Dad passed on what would have been his mom’s (Nana’s) birthday. We found it very fitting that she would call him home to be with her and Papa. He also joins his sisters Mary Lou Olson, Kathleen Janney and Jean Ellis and brothers Larry and Patrick Whelan, brother-in-law Bob Olson, (father-in-law and mother-in-law) Robert and Mary O’Connor, brothers-in-law Clifford and Tommy Joe O’Connor, and nephews Pat Janney, Tom Whelan and Rick Olson as well as numerous aunts, uncles and cousins.

We want to express our sincere gratitude to the First Responders for all your visits to the house to help with Dad. Your help and compassion allowed Mom to have Dad stay home through some challenging times. Special thanks to Rick Jensen for the physical therapy home visits. Aside from the invaluable physical therapy workouts, Dad loved to converse with you on the topics of the day. Lastly, we can’t say enough about the help from Senior Solutions/Hospice. Sheena, Sonny, Heather and Dan, you are amazing, caring and compassionate angels. Thank you to all from the bottom of our hearts.

While it’s hard to say goodbye, Dad had an incredible 90-year run! He was truly blessed to have Mom at his side throughout his journey. He credited her for his success and happiness. They shared an unending love with one another and to our family.

Due to COVID, a private family service has been held. A celebration of Dad’s life will be held at a later date when safety guidelines will allow for a larger gathering.