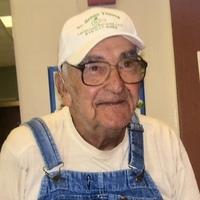 So sorry to hear..thoughts and prayers

I am deeply and sincerely sorry for the loss of your father. There will never be another man like Diamond Jim. Sending prayers and love. Ginger

So very sorry for your loss, our thoughts and prayers are with you all at this time.

Thank you for your service to our Nation. Serving in the Armed Forces is one of the greatest gift you can give to yourself, your family, your friends and your Nation. May God bless you and your family.

Get email updates about Joseph James "Jim" Bewley delivered directly to your inbox.

He was the eldest son of Joseph James and Alma (Lynch) Bewley. He was born September 20, 1930 in Atchison, Kansas. He married his childhood sweetheart Gladys “Peachie” Hansen and they were blessed with four children, Gary, Janice Morelock, Janey (Tim) Grebe and Judy Stiffler (Tim Servaes) who survive him as well as eleven grandchildren, many great and great-great grandchildren, siblings William Bewley, Pat Swordy, and Jo Stewart, nieces, nephews and long-time friend, Tom Mangimelli.

His father died when Jim was eighteen years old, resulting in Jim’s character trait of feeling and acting as a father figure to his siblings and everyone who crossed his path. At the age of thirteen Jim was most proud of hauling ice for people’s refrigerators to help support his family as well as various other jobs.

Jim entered the United States Army in 1951, serving in the Korean Conflict and earned the Korean Service Medal with three Bronze Service Stars and United Nations Service Medal. He was honorably discharged in 1953.

He owned and operated his own businesses until 1987 when he joined Borton Inc. He was well known and respected in the community; he was a devoted father and family man.

He was very athletic and enjoyed ice and roller skating and baseball. He was skilled at trap shooting, golf, pool, cards, etc. He was proud of winning several boxing bouts and won the 1947 golden gloves tournament.

He was preceded in death by siblings Raymond, Louise (Bewley) Moulton, Peggy Wilburn, Helen Bewley and a grandson Christopher Ruhnke.