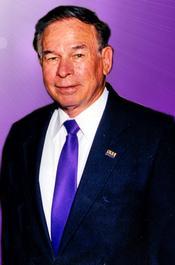 Dear Sampite Family - I just learned of Joe's passing and extend my deepest sympathy. When I moved to Natchitoches to clerk for a judge, Sharon took me under her wing. I remember many times with her and Joe; or, being with Sharon tracking Joe down at events by following the stickers. I will be ordering stickers today in Joe's honor to spread around our town.

Dear Sampite Family, I have so many fond and fun memories of Joe and family. It is ironic that my Dad passed away only 8 days earlier. They really had a special bond. Joe will always be in our hearts.
May the love of God and the peace of Christ be with you always.
Judith LaRoue

Thank you for your dedication Joe. May your light continue to shine bright in heaven.

Dear Sampite Family,
I am so sorry for your loss. He will be greatly missed. Many of my favorite high school memories include donuts and chats with "Mayor Joe". Many people could take a lesson in caring about their community and children from him.

This man would never pass you on the street and not say hello to you, Always remember his students by there name. will miss you Mr Joe.

My sincere condolences to the Sampite Family.

My thoughts and prayers are with the family for their loss. Joe was a great person and an all-around "good-guy". He was respected by all who knew him. May he always be remembered for all he did for the Natchitoches Community.
Janine Waters

We just wanted ya'll to know the Sampite' family is in our thoughts and prayers. We pray that you find comfort and peace from our Heavenly Father.

WE are sorry for your loss. You are all in our prayers

Get email updates about Joseph Sampite delivered directly to your inbox.

Funeral services for colorful long-time Natchitoches mayor Joe Sampite' will be conducted Tuesday at 10:00 a.m. at the Minor Basilica of the Immaculate Conception Catholic Church in Natchitoches with interment immediately following at Memory Lawn Cemetery in Natchitoches, LA. Visitation will be Monday from 4:00 to 8:00 pm at Blanchard St. Denis Funeral Home, located at 848 Keyser Ave in Natchitoches. A rosary will be held at 7:00 pm during the visitation.Sampite', who died Friday at the age of 81, served five terms as mayor of Natchitoches from 1980 until his retirement in 2000. He was known for wearing white socks, a carryover from his coaching career before becoming mayor, and for the "I Love Natchitoches" stickers that he distributed by the thousands over the years.Born in New Orleans in 1931, Sampite' received a business education degree from Northwestern State University in 1959. He served in the National Guard and U.S. Air Force before beginning a career in teaching and coaching. Sampite' was a successful basketball and baseball coach at St. Mary's High School in Natchitoches and Jesuit High School in Shreveport.After retiring from his education career, Sampite' became one of the most effective and dynamic mayors in Louisiana history. He was instrumental in bringing the filming of the movie "Steel Magnolias" to Natchitoches and was at the forefront of downtown revitalization and the development of a vibrant tourism industry in the city.Natchitoches was recognized in national publications during Sampite's tenure as mayor as a leading site for tourism in Louisiana and the South and as one of the nation's most attractive communities for retirees.As mayor, he expanded the city's recreation program and police and fire departments and spearheaded major improvements in infrastructure and the community's airport. He guided the annexation and development of a corridor from the city to Interstate 49 that increased the size of the city by 40 percent.Sampite' served as president of the Louisiana Municipal Association and was the first recipient of the statewide organization's President's Award. While serving as mayor, Sampite' was selected by The Shreveport Times as one of the Top 100 Influential People in Northwest Louisiana.Inducted into the Louisiana Political Hall of Fame in Winnfield in 2002, Sampite' was also inducted in 2000 into the Northwestern State University Hall of Distinction, or Long Purple Line, the university's highest honor for alumni.During his political career, Sampite' was profiled in the prestigious magazine, "The Oxford American," in an article entitled "No Ordinary Joe."He received numerous other honors, including Man of the Year Awards from the Natchitoches Parish Chamber of Commerce, Natchitoches Jaycees, Kiwanis, and the Louisiana Parks and Recreation Association. He was a life member of the Chamber of Commerce, Knights of Columbus, American Legion and Founders of Natchitoches. The former mayor was an active member of Minor Basilica of the Immaculate Conception Catholic Church as well as many local groups during his retirement such as the Agitators, The Gerousia, Krewe of Dionysos, and the Coach Ledet Coffee Club.Sampite' was preceded in death by his parents, Dr. Alphonse J. Sampite', and Bathilda Guillot Sampite'; his wife, Hazel Barnes Sampite'; daughter, Sharon Elizabeth Sampite'; along with many of his siblings: Ruth Sampite', Albert Sampite', Eleanor Sampite' Dimmick, Leona Sampite' Hernandez, Grundy Sampite', Kelly Sampite' Poche, Cecilia Sampite' Morford, Michael Sampite', and Mary Sampite' Lacour.He is survived by his son, Chris Sampite' and wife, Daphne Gray Sampite', and their sons Michael and Ryan Sampite'; daughter, Sheila Sampite' Hardin and husband, Lt. Col. Alan Hardin, and their sons Daniel and Andrew Hardin; daughter, Michaela Marie Sampite'; and his grandchildren, John and Allison Van Hoof along with siblings: sisters, Sally Logan of Alexandria and Marielise Sampite' Brosset of Cloutierville, brother, A.J. Sampite', Jr. of Hemet, CA.; and close friend and companion Sue Vercher.Pallbearers will be Marvin Brosset, Charles Lee, John Van Hoof, Gary Deblieux, Lawrence Fuller, Mike Poche, Terry Sampite' and Frank Cicero. Honorary pallbearers include Aubrey Logan, Charles Wurster, Sam Friedman and Wayne McCullen.In lieu of flowers, the family requests that donations be sent to the "Joe Sampite' Scholarship Fund" at the Northwestern State University Foundation.