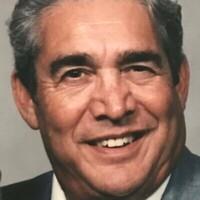 Get email updates about Joseph T. Mirabile delivered directly to your inbox.

Joe was born May 29th, 1926 in Albany, New York. He graduated from Roessleville High School and immediately joined the United States Navy. He served aboard the USS Vincennes in the South Pacific theatre until the wars end. He returned from service to go to Hudson Valley Community College where he studied radio and electronics. He was also a DJ at the school’s radio station.  Joe started his career at General Electric then transitioned to Empire State Wholesalers, where he rose to the position of service manager. He finished his life’s work at Lake Electronics in Colonie and retired from there.  Joe could fix most anything electronic. He was widely recognized as the guy to go to when nobody else could fix it.

Joe met his late wife, Antoinette Baronowski at Ford’s Tavern and they were married for over 50 years and together built a good life. They started their life together in a little trailer and ended up with a home in Colonie, NY where he raised his two children and later became a snowbird, spending the cold winters in sunny Florida. He would take many family vacations to Florida and he would always drive.  Joe and Antoinette’s (Red) dedication to their family was evidenced by the decision they had to make when they adopted their children. They had to convert to Episcopalian from Catholicism in order to adopt. The love and dedication shown by Joe and Red to their children was inspirational. Joe received the Salvation Army’s Silver Star award when his daughter was ordained as a minister in the Salvation Army. He later converted back to Catholicism and joined Our Lady of Mercy Church in Colonie. Pops was a family man and seeing his children succeed was his greatest joy.

Joe was an avid bowler, straight over the second arrow was his line and it never changed. He loved Sunset Lanes and bowled in many leagues. Poppa Joe will be missed by all those who bowled with him. He was also a pretty good golfer, the Town of Colonie was his place. That is also where he scored his Ace, a Hole-in-One.  He was also a proud member of the Colonie Elks. Many a New Year’s Eve was spent dancing and having a good time there.

He is survived by his children, Anita Mirabile and John J. Mirabile (Patricia) and two sisters, Vicki (Ragone) and Ellen (Gregory).

Burial with military honors will be at 12noon at the Gerald B.H. Solomon Saratoga National Cemetery, 200 Duell Road, Schuylerville.

Donations can be made to Saratoga National Cemetery Honor Guard Association, Inc. https://snchga.org/.

Online remembrances may be made at www.burkefuneralhome.com.