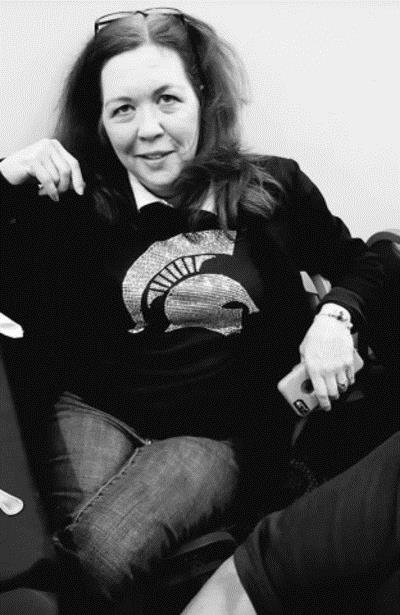 In loving memory of a beautiful person .. Working with Kathy for many years , I knew her as always positive and kind with customers and coworkers.. my sympathies to all her family .. I know she will be dearly missed till you meet again.

They say life has a beginning and an end, not true. Only that portion of your journey has ended, Infinity starts when the 1st part of the journey is Mastered and you begin again.

Such a lovely person, i never actually worked side by side with her. But i would see her in passing everyday as we changed shifts, she always made eye contact and would nod and smile. She validated your existence and recognized your worth. So in my heart i will miss her place on this earth

I have just learned of sweet Kathy's passing, and am deeply saddened. My condolences to the family on the loss of a truly unique, one of a kind, loving, super great person! Kathy and I worked together for the Airline. She was always so great out there with all of us, and there were probably 1200 of us in that department all together. Everyone that knew her liked her. A LOT. I wish I had known earlier than today. I would have been able to attend and say goodbye, but I hadn't been in touch...

I read Kathy's obituary over and over again in total disbelief. To say I'm shocked is an understatement. Kathy was a dear and loyal friend. We texted each other over the past few years promising to get together but never did due to family obligations or other commitments. Now I'm very remorseful that we didn't get the chance to hook up. I considered Kathy as one of my best friends. We were there for each other throughout the trials and tribulations that life always doles out to...

I am so profoundly saddened to hear of Katherine’s passing. I was a sorority sister of hers. She was always loving and smiling. I seriously can only think of happy memories when I recall our friendship. May you find peace and comfort as you navigate this journey. In love, Peg Martinez Hajek

Dear Dan, Amy and David, My heart is broken and hurts for you and your families. I don't need to tell you what a unique & wonderful person Kathy was, but please know there are many many more people out there whose lives were touched by her wise and special personality. She will live on in our hearts and memories which will forever bring a smile to our faces, and probably an outright laugh, too! I am so sorry for your loss. Sincere Condolences to you all. -Kristy Seibold Class of 1975;...

My thoughts and prayers are with the family and friends. She was so nice and extremely supportive. She will be missed.

Get email updates about Katherine Grooman delivered directly to your inbox.

Katherine Dane Grooman, 67, of The Woodlands, Texas traveled to heaven during the evening of Monday, June 14, 2021, and returned to her mama’s loving arms.  Her memorial service will be held Wednesday, June 23rd, 10:00 am at Klein Funeral Home, 14711 FM 1488, Magnolia, TX, 77375.  Katherine was the first of three children born in Detroit, Michigan, to Marilyn Yvonne and James Parsons Dane, followed by brothers Bruce Campbell Dane, and James (Jimmy) Arthur Dane.  Although she bossed them around a fair amount and inflicted the standard amount of “big sister torture,” on these poor boys, her little brothers were her heart and soul.  For the entirety of her adult life, she would miss living with them every day.

Everyone who knew Katherine was made aware that her family was her most prized possession, and she was born into an extraordinary family who loved her dearly.  Her mother Marilyn’s “first baby,” little brother David Sucher, was an instrumental force in her life, whom she adored, along with his fabulous wife, Karen and his three beautiful girls, Jill, Carrie, and Laura Sucher.  Her father Jim’s little “sis,” Marion was such a fabulous Godmother, that Katherine would later choose Aunt Marion as Godmother for her first born child.  Marion married the lively and outspoken Bob Brewer, and their two sons Bill and Richard Brewer, were so dear to her, that she also considered them brothers.

After graduating from Redford High School in 1971, her three true loves entered her life: Michigan State University, Kappa Kappa Gamma, and a Theta Chi named Dan Grooman.  Katherine often reminisced about the great times she had at MSU, where she forged lifelong friendships, met her future husband, and learned the Kappa Lullabies that she would sing to both her children and grandchildren every time she rocked them to sleep.  She graduated from college in 1975 with a Bachelor of Science in Retail Management and was hired by Montgomery Ward for a position in management.

Dan and Katherine were married in 1977, and bought their first home in Chicago, Illinois, which is the city where they both started their careers.  A mere nine months after their wedding, Katherine was diagnosed with breast cancer at the age of 24, but she was able to soldier through major surgery and beat the disease with lots of support from friends and family.  Doctors informed her that she could not have children, due to the hormone-dependent nature of her recent bout with cancer, but she was not one to let medical advice stand in her way.

Her first child, Amy Grooman, was born in 1980, and her son, David Grooman was born in 1985.  She was an active, fun, highly involved mom who always participated in the PTA, helped with nightly homework, and chauffeured her kids to their numerous after school activities.  Katherine and Dan moved to several places throughout the years and would eventually move to The Woodlands, Texas, where Katherine lived the rest of her life.  Distance never stopped her from being close with the family, and as her family grew, her heart grew, because she fell in love with each and every baby born into her family.  Bruce Dane’s children Andrew Campbell, Katherine (Kara) Natalia, and Luke William, along with Jimmy Dane’s children, James Alexander, and Nicholas Michael were loved as if they were her own.

Katherine was great at many things, but her light truly shined the brightest in her role as a grandmother.  Her first grandchild, Madison Louise Friedsam, was born January 21, 2001, and when Katherine first held her granddaughter, Madison curled her fingers around grandma’s pinky, and around her heart.  Everett James Grooman was born June 13, 2018, and every day for the rest of her life, she raved about her grandson, sharing tidbits of all the adorable things Everett did and said during visits and FaceTime calls.

The undisputed source of Katherine’s most favored and precious memories is the Victorian house in Charlevoix, Michigan that has been owned and loved by the family for over 100 years.  As a child, she spent the summers in Charlevoix, playing with her brothers and cousins until the sun set over Lake Michigan.  The house in Charlevoix grew more sacred to her as the family grew, and her heart was filled when the summer months brought Brewers, Danes, Everinghams, Groomans, and Suchers together.

​Everyone who knew Katherine loved her.  She was a remarkable, beautiful, loving woman who was the life of the party, and she will be forever missed.