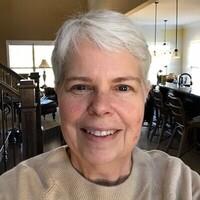 Mike, Clyde and Michael,
Sandy and I just learned of your loss. Your families peace is in our prayers during this trying time. I know you will truly miss her as a wife and mother, but heaven has gotten another angel. You will be reunited one day and we pray God gives you peace. Sincerely, Chris and Sandy Carlile

Mike, Clyde and Michael, I am so sorry for your loss and I pray that you find comfort and strength in the days ahead. God bless each of you.

Mr. Peterman, our deepest and heartfelt condolences to you and your family. Our prayers and thoughts are with you and your family. We also rejoice as Christians knowing she has started a new beginning as promised, just part of the reward for all the good she provided throughout her life supporting others

I’m very sorry for your lost. Know Katherine from 4th Brigade. We volunteer together. Sending prayers.

Mr. Peterman, our deep and heartfelt condolences to you and your family. Our prayers and thoughts are with you all.

Our deepest sympathy to you Mike and the entire Peterman Family. You are in our prayers today and in the future. Rememer and Cherish all the wonderful memories as we're sure there are many. May you find comfort knowing she is now at peace. Condolences Mike and Anne Kelley.

Get email updates about Katherine Peterman delivered directly to your inbox.

Katherine Jean Peterman PsyD, “Kathy,” passed away on September 18, 2021, at age 64, of “an excess of good birthdays.”  She was born on March 2, 1957, in Geneva, New York, as the oldest child of Margaret R Iddings and Robert E Curle (Chief Master Sergeant – Retired).  She is survived by her husband of almost 30 years Michael P. Peterman and her two sons: Clyde E. Peterman and Michael P. Peterman Jr.  She has three siblings: Sharen Curle, Richard Curle, and Karen Curle.  She has a host of in-laws, nieces and nephews, great-nieces, and great-nephews.

Katherine followed her father into the United States Air Force by enlisting in 1982, serving at Wright-Patterson Air Force Base as an Airman to the Staff Sergeant working as a mental health technician within the base’s Mental Health team.  Providing mental health services to Airmen in need fascinated Katherine and drove her to finish her Bachelor of Science in Psychology by way of night school. In 1986, Katherine was accepted into Wright State University’s Doctor of Psychology program and was honorably discharged from the Air Force to pursue her dream of becoming a psychologist.  In 1987, Katherine completed her doctoral thesis, “Enhancing the Role of the family in the Military Service,” and was awarded a PsyD degree.  She passed her professional licensing examination, became a clinical psychologist, and received a commission as Captain in the Medical Service Corps of the United States Army.  Her clinical internship was completed at Walter Reed Army Medical Center.  She was posted as the 1st Infantry Division’s division psychologist from 1988 to 1991, deploying to Operation Desert Storm. During Operation Desert Storm, Katherine was awarded the Combat Medical Badge, the Bronze Star, and other medical service awards and commendations. Upon returning from Kuwait, she was posted as a Staff Psychologist at Walter Reed Medical Center for two years before becoming the Chief of Clinical Services at Blanchfield Army Community Hospital at Fort Campbell. Katherine and Michael Peterman were married 8 October 1993.  Eventually, Katherine separated from service after giving birth to their first son, Clyde. Throughout her service, the awards she was most proud of was her Air Force Commendation Medal and the Air Force Good Conduct Medal she earned as an Airman.

After Katherine transitioned out of formal military services, she took on the role of wife, mother, and Army spouse.  She led multiple family changes of duty station, managed her sons’ changing schools (within the US and Europe), and supported her husband’s Family Readiness Groups. In her free time, she supported Scouting, was an exceptional “little person” soccer coach, and home-schooled Michael Jr. until he graduated high school. After 9/11, Katherine had an opportunity to use her graduate thesis by leading the Family Readiness Group for the largest battalions in the 82nd Airborne, the 101st Sustainment Brigade, and the 101st Airborne Division as Mike did 38 months in combat. Her efforts with these Family Readiness Groups, like every Army wife of her peer group, was comprised of unpaid service to our nation that sprung from her love for our country, a love of Army families, and her dedication to ensuring our deployed units’ families were taken care of.  Although this sacrifice to others was sometimes at the cost to her own family and health, it earned her the respect of her fellow Army spouses, Army Communities, Army Leadership, and the Soldiers. Katherine was awarded the Dr Mary E. Walker Award while supporting the 508th Task Force and the Catharine Greene Award from the Quartermaster General for her dedication and service to Quartermaster Families.

Kathy also had a few sayings worth remembering: “Soldiers need to remember that their families do not get R&R or block leave,” and “A hundred years from now, the world may be different because I was important in the life of my children.”  Those of us who know her understand that she made life different and decidedly better for each of us.