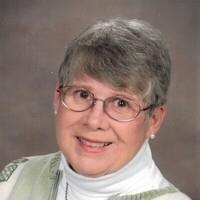 It's heartbreaking to think of a world without Miss McNamara. I am sorry I will not get to see her again in this life, but I do look forward to a joyous reunion in heaven! She taught me so much and I so appreciate my years with her as my favorite teacher at Alburnett. I was so fortunate to participate in musicals with her as director. She will forever have a special place in my heart.

Kathleen was a brilliant choreographer and wonderful teacher. It was a privilege and great fun to be in the Jefferson performances she choreographed. Her talent and spirit will be missed by many. May you take comfort and strength knowing the legacy she leaves behind.

Kathleen will be missed. What an accomplished life! I danced under her also at Kennedy and her troop. I have lots of great memories. My sympathies on your loss.

Sorry for your loss, She always said to me how beautiful the grand girl's are.I seen she a very nice and loving person and will be missed always❤

Linda, David, Kathleen's girls...I am SO SORRY for your loss. Kathleen was such a part of my memories of Fairfax and then later, part of my professional life. I always ran into her at school functions and loved talking to her. Fairfax memories of tap dancing with the Steinmetz boys at various functions, 4-H meetings and the home by the viaduct. She was very accomplished and I'm sure you were all so proud of her. I know she was proud of all of you.
Prayers for peace and strength.

Jolene and girls-
Kathleen will be missed sorry for your loss.
❤ Salehoglu’s

What I valued the most about Kathleen's teaching was that students learned independence and gained a better sense of self as she taught creativity by example. I valued Kathleen as a genuine and caring friend.

It should also be said that Kathy choreographed many musical offerings at Mt. Mercy College 1962-66. I particularly remember being a scared freshman who had never danced. I had a leading role in The Boyfriend that year and Kathy was also a freshman. What talent she had for turning amateurs into dancers! It was a smashingly received production with Sister Mary Mildred at the helm and Kathy's choreography! And, boy, could she dance! I am so happy to read that her talents continued on and...

Kathleen’s mother, Evalena McNamara, was my 5th and 6th grade teacher in Atkins, and that’s when our class was first introduced to this adorable child. It was predictable that she would continue her mother’s legacy of character and confidence building through the arts, especially music. I haven’t seen Kathleen in over 50 years, and was unaware of her own beautiful legacy. Her passing was a sorrowful surprise. From the Roman poet Virgil: Optima Dies, Prima Fugit (The Best days are the...

Get email updates about Kathleen McNamara delivered directly to your inbox.

Kathleen is survived by her brother, David McNamara of Fairfax; sister Linda Earley of Cedar Rapids; daughters, Phaedra McNamara, Jenny McNamara, Jolene Salehoglu and her children, Syriana and Alessandra and Justine Baldwin; many cousins; and her friends, Bethel and Larry Sylvester, Bob Assink, Mary and Terry Ley, and countless other friends.

She was preceded in death by her parents; longtime friend, Spencer Pink; brother in law, Patrick Earley; and many aunts, uncles, cousins and friends.

Kathleen was born on April 2, 1944 in Cedar Rapids the daughter of David and Evalena Sampson McNamara. Kathleen’s love of the arts started as young as kindergarten. She was fond of singing, making up songs and creating dances. Kathleen, Linda and David were part of their own ensemble known as McNamara’s Band performing at community events throughout eastern Iowa. Kathleen studied dance through her childhood, started her own dance studio at the age of 12 in Fairfax and taught dance lessons at the YWCA in Cedar Rapids and Marion throughout her college years. She attended St. Patrick’s Grade School, graduated in 1962 from Regis High School, from Mt. Mercy College with a BA in Music in 1966, and in 1997, she received a MA from the University of Iowa in Music. Kathleen furthered her studies in dance from: Irene Ilten School of Dance, Dieman & Bennett Dance Academy, the University Of Iowa Department Of Dance, the Martha Graham School of Dance, New York, the Independent Dance Studies of the Shaker Village in Grey, MN, and studied dance of local cultures throughout Kentucky and New England. She also furthered her music studies by receiving the Carl Orff Music Teaching Method Certification 1983, the Recorder Studies Ithaca College, New York, the Dalcroze Eurythmics Method Roosevelt University, Chicago, IL, the Recorder and Renaissance Dance at Hampshire College, Connecticut and the Iowa State Children’s Classroom Music Studies.

Kathleen was a K-12 Music teacher at Alburnett Schools from 1966 to 1973, an Elementary Music Specialist, Coolidge Elementary from 1973 to 2004, and a Cedar Rapids School District Choreographer.

She founded the Education Dance Theater of Cedar Rapids, wrote and produced 30 Children’s Musicals including the Children’s Nutcracker.  She choreographed over 150 productions amongst the Cedar Rapids Community Schools, Theater Cedar Rapids, Coe College Theatre, 4th of July Freedom Festival and the Follies. Kathleen was involved in many School Assembly Concerts and Sing Alongs and All-School year end concerts.  She worked tirelessly with the Bi-Centennial All-School Concert: The Parade of States, the Spring Fling concerts at Taft Middle School, the International Amana Agricultural Expo Choir, organized music when the FINE Award was presented to Coolidge School by Governor Terry Branstad and was present when the Coolidge Kids sang “Public School USA” for former President and Mrs. George Bush.

She was a member of the Beethoven Club, the 4-H Club of Fairfax, Mother of Perpetual Help, member and Vice President of the National Catholic Society of Foresters, and St. John XXIII Catholic Church.

Kathleen was an avid gardener and especially liked roses. She loved time with her family at their cabin at Delhi Lake.  Kathleen with be missed by those who knew and love her.

Our family would like thank Dr. Jasmine Nabi for Kathleen’s cancer care, and staff at the Dennis and Donna Oldorf Hospice House of Mercy for their kind and supportive care in Kathleen’s final days.

Memorials may be directed to family to be donated to Kathleen’s favorite charities.