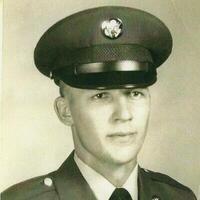 Sorry for your loss

So sorry for you loss. Your family are in my prayers.

You were always one of my heroes,I will miss you always,thanks for always having my back all through life

Get email updates about Leonard Steer, Sr. delivered directly to your inbox.

Karren Peevyhouse and husband Delmar of the Home in Atoka, OK

ALSO SEVERAL NIECES, NEPHEWS AND A HOST OF FRIENDS

PRECEDED IN DEATH BY