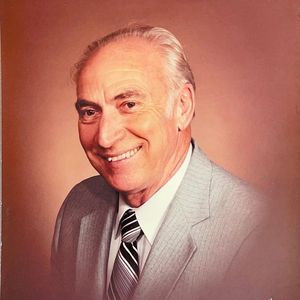 What a true blessing from God Loy was!!! He ministered so much to so many, my mom Mona Byyny included! She was in Joint Heirs and every time I was there with her he so blessed me! We share in your grief it is hard! He will be so missed!! Sincerely in our prayers! Mona Byyny, Jim and Val Axtell

You were a cousin I would have enjoyed knowing and spending time with. Bless you.

My family grew up across the street from Loy and his family. He was a kind and generous neighbor who always had time for anyone on the block. He will be greatly missed and his legacy lives on with his sons.

My condolences to the Smith Family. I was a Caregiver for Loy Smith a few years ago.
Mr. Smith and I had many good conversations and I learned so much from this wise and caring man. I was honored to care for Loy. He always told me one day I would be a great Nurse when I finished my studies . Today I am a licensed nurse and never forgot Mr Smith and his encouraging words to never give up and always follow my dreams. May he Rest In Peace as I am sure he is with Our Heavenly Father....

I was privileged to know "Mr. Smith" from 1970-on due to my special friendship with his youngest son, Eric.

Mr. Smith lived a long and productive life. The entire Smith family should be very proud of him. He was a great husband, dad, grandfather, great grandfather, military hero, and member of his community and church. I was honored to know him. He always greeted me warmly and with a nice smile.

Mr. Smith will be missed but never forgotten. His wonderful...

The nicest and the most humble man I have ever met. Being best friends with Eric from fifth grade through college and in the present I spent many many hours at the Smith house growing up and Loy was always there with a smile and a loving heart. Had the pleasure Of being with him a couple days before his passing at the hospital with Eric as we sat there and watched the dodger game from his bedside it was just a totally awesome experience. Thank you Loy for everything.
God bless the Smith...

Loy Ward Smith, age 96, of Lakewood, California entered the gates of heaven into the waiting arms of his savior, the Lord Jesus Christ, on September 30, 2021.

Born in Corsicana, Texas on March 11, 1925 to Curtis and Cecil Giles Smith, Loy was admired and respected by all that had the privilege of knowing him. He was a true Man of God: acting justly, with mercy and walking humbly with God. He had a soft, southern drawl and penchant for story telling, and was known as a hard worker. A trait that allowed him to adapt to a broken family and the Great Depression era.

After hitch hiking from Texas to Long Beach, CA in 1942 at the age of 17, he lived with his aunt and next door to his future wife, Elayne Ellison. Soon after his 18th birthday, he enlisted in the Navy and his ship was part of many island invasions in the Pacific. The war had a major influence on Loy and he developed a strong friendship with many of his shipmates; the experiences of battle stayed with him his entire life thereafter. In his later years he told stories of his time onboard his ship during the invasion and flag raising on Iwo Jima. He was proud to have served his country.

After his discharge from the Navy, he and Elayne were married in Long Beach in October of 1946. He then began his career in the fast-growing tire industry where he worked until his retirement. In 1950, his young family moved to the new city of Lakewood where he lived in the same house until his passing. They were active members of the First Baptist Church of Lakewood (now Arbor Road Church) where Loy had a number of ministries over the past 71 years. One of his joys during his retirement was his daily Bible study and his 25 years of teaching the senior adult Sunday school class. He will be remembered for his wise counsel, leadership and teaching.

He had three sons with Elayne: Loy Christopher "Chris", Bruce, and Eric. In 1966, Elayne was diagnosed with Multiple Sclerosis, and with a true servant's heart, he, along with daughter-n-law, Sandy, provided loving care for Elayne until her passing on their 32nd wedding anniversary in 1978. He had known her since she was in middle school in Signal Hill.

His life was renewed, however, in 1979 with his marriage to Hazel Larson. She was serving in the church as secretary to pastor James Borror, who would become the best friend to Loy as they served together in the church. Loy and Hazel were able to travel the world, and attended many summer and winter Olympics. They also made many new friends with others that had served on Loy's ship through the reunions they planned and organized for over 25 years in cities across the United States. This was a wonderful time in both of their lives, and they held special memories of the time they were able to travel and meet new people. Together, they took great pleasure hosting an annual family Christmas dinner, 4th of July parties, back-yard cookouts, attending grandchildrens' graduations and weddings, welcoming great grandchildren into the family, and cheering on their beloved Dodgers.

A man of honor, patience, wisdom and understanding. He was met in heaven with the words from Jesus: "Well done my good and faithful servant"

A memorial service for Loy will be held on October 30, 2021 at Arbor Road Church, Lakewood.