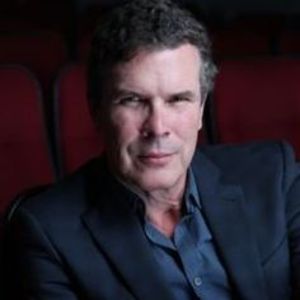 What a Gentleman. Lyndon allowed me the privilege of protecting his family in their homes, first in the valley, and then in their present home - for a long time. The two homes reflected his personality. The first was truly creative, and the next, a Stately Manner. In the early '90's, he came over to my cracker box office, totally
unpretentious, sitting in the folding chair, listening like an actor (wonder where that came from?) with
a calm wonder, and fully knowing that...

Ivana, I am so sorry to hear of Lyndon's passing. May his Soul Rest Peacefully. Praying that God comforts you and Claire and all of his loved ones through this difficult time. Sending you Love & hugs.

I'm truly sorry to hear about your loss, Ivana and Claire. I'll always remember and smile at Lyndon's overwhelming enthusiasm and brilliance with everything we talked about, whether it be art, steampunk, and of course film! The last time we talked he had butt-dialed me and talked and laughed for an hour! And I loved working on our film together, Ivana and I'm glad it took so long to finish because it gave us all more time together. I am so grateful and blessed for knowing Lyndon and my...

These few words I can write here will not adequately express my shock and sadness at hearing the news from my nephew Evan that Lyndon Chubbuck died. (Evan was pastor of Lyndon's mom's funeral in 2009.) I have several HOURS of recordings of interviews I did with Syble and John Chubbuck I never got around to digitally converting and sending to him and Gary. I need to CONTACT Ivana and/or Gary & June about this!

We are so very sorry Ivana and Claire for your loss. We will always remember Lyndon as a smart, lovely, talented man. Rest In Peace.

Mr Chubbuck, I will forever be grateful for all your kindness and for what you taught me. My fondest memory of you, is letting me sit in the driver's seat of your red beauty of a vehicle. You will be in my thoughts for many years to come.

Beyond his immense talent and intellect Lyndon was among the best people I have ever had the privilege of knowing. I miss my Brother.

My dearest Lyndon, you were my champion. You taught me to step back, remember to laugh because, what can you do, it's perfect, go home, sleep. Thank you for always being there with an encouraging word. To my Ivana and Claire, I love and miss you. My girls.

Lyndon Chubbuck, 67, of Washington, DC passed away on Tuesday, April 13th, 2021 in his home in Hancock Park. Mr. Chubbuck is an award-winning motion picture director and is the co-founder of the prestigious Ivana Chubbuck Studio. He is survived by his wife Ivana and his daughter Claire.

Lyndon was raised in the Georgetown and Capitol Hill areas amongst Washington D.C.'s Social Register. Living in this privileged swatch of society, he always felt like an interloper - a socio-economic voyeur. Mr. Chubbuck's conflicting self-identity is at the core of recurring themes in his photography. As a filmmaker, Lyndon had a cerebral interest in the nihilistic corrosion of society by violence and greed. His work pursues a soulful interest in self-empowerment by small, heroic actions.

Lyndon has won or been an official entrant in more than forty international film festivals for such work as The War Bride, starring Anna Friel, Molly Parker and Academy Award winner Brenda Fricker, The Right Temptation, The Unnaturals, and William Faulkner's, A Rose for Emily- which is considered by the Faulkner Foundation as the best adaptation of Faulkner's works. A Rose For Emily currently resides at the Smithsonian in its permanent collection. He has also directed and/or produced films for Paramount Pictures, Warner Brothers, Columbia, Tri-Star, and Twentieth Century Fox along with numerous hour-long network television programs such as Wiseguy, Due South, and Baywatch.

Lyndon was a partner of the award-winning advertising agency ANDREW JANSON & PARTNERS, which has produced advertising campaigns for the Gianni Versace, Ford Motor Company, AT&T, Rolex, Ralph Lauren, and Oxfam. Lyndon recently won the coveted Telly Award for WomenHeart's PSA "The Race to Save Lives," which won several categories at the 40th Annual Telly Awards. A true artist in every sense of the word, his unique vision and perspective will be missed.