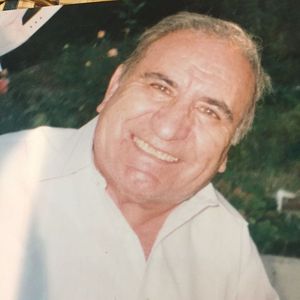 Manuel Gilbert Castillo, 90, born on April 22, 1931, in Riobamba, Ecuador, passed away October 8, 2021. He resided in Woodland Hills, CA at the time of his passing. Arrangements are under the direction of Forest Lawn, Hollywood Hills, California.

Manuel, lovingly called Manny, promised himself as a child that he would one day be a successful man and travel the world. He came to this country with his new bride, Nelly, 62 years ago. They arrived with a pittance of money, but with a mountain of ambition. The Castillo couple started in New Orleans Louisiana, where their first daughter, Ann Maria was born. They then moved to Chicago, Illinois for a few years until they decided to make their new home in Los Angeles, California in 1966. A jeweler by trade, he eventually started working in his craft once again for a well known jeweler in Beverly Hills, working tirelessly until he was able to eventually open up his own jewelry store in Encino, California. During that time, they had two more beautiful children, Nelly Fabiola and Manuel Christopher. Manny had many wonderful and famous clients, and had an immense love for the Jewish community. His childhood dream of success came true and he traveled to many counties. He was blessed with seven grandchildren: Justina Kaleugher, Anthony Kaleugher, Cody Smith, Luke Smith, Kylan Castillo, Harlyn Castillo, Adelyn Castillo. He was also blessed with one great grandchild, Sky Kaleugher. Manny was known as a generous, vibrant, and intelligent man with a big heart, always making sure everyone was happy. He often told his children that Nelly was the love of his life, and that she was a true saint. We love him more than words can say and he will be missed very much.

Thank you so much Papa, for all you have done for us!!! You accomplished your dream, and now you are in the loving hands of God.

May fond memories of your beloved Dad bring you comfort during this hard time in your life. Our heart's and prayers go out to you and your family. We are very sorry to hear of the loss of your Dad. Please accept our condolences and may our prayers help comfort you and your family.

In loving memory of a wonderful person. We will miss you always. May the soul of Manuelito Castillo Rest In Peace

Tio Manuel how do I say Goodbye to my beloved uncle I want to say one last time Thank you for helping us come to America Thank you for all the advice you have given me through my lifetime you wanted nothing but the best for all of us and because of you we do, We all have a purpose in life and yours was to help and help you did. I will hold you in my heart Tio I Love You, Raul Vicente Zavala

We are sadden to hear of the passing of our dear uncle Manuel. We’re thinking of you all in your hour of grief. May you always feel your Dad’s presence in your heart.

Uncle Manuel was a great person and shared his loved and wisdom because he was generally a loving person. He always had a big smile on his face, from cheek to cheek, that you can see from miles away. He will be truly missed.

May he Rest In Peace.