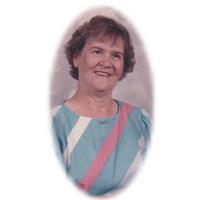 Penny and Family; So sorry for your lost. My thoughts and prayers are with you at this time

So sorry to hear if the loss of you Mama,Prayers and comfort for all

In loving memories of a very special lady, Charleen Collins Browning, who will be missed very much. May peace be with your wonderful family. Betty Sue

Charleen, you were always so good to me and I will never forget that. We had so many good times including road trips. You were the best mother-in-law ever. I will always cherish you.

Get email updates about Margaret Browning delivered directly to your inbox.

Mrs. Margaret Charleen Browning, age 94, of Town Creek School Road in Blairsville, passed away peacefully on Tuesday January 14, 2020, surrounded by her loving family. Mrs. Browning was born on November 7, 1925 in Blairsville, GA., the daughter of the late Moody Watson Collins & late Martha Aria Collins. In her free time, she enjoyed cooking, quilting, gardening, and puzzles. Margaret was a native & life-long resident of Union County. She is preceded in death by her husband, Hoyt Paige Browning in 2015, a daughter, Martha Clark, and a son, Joey Browning. She was a member of Union Baptist Church.

Funeral services will be held on Saturday, January 18, 2020 at 2:00pm from the Mountain View Chapel with Rev. Tommy Hunt officiating. Interment will follow in the New Liberty Baptist Church Cemetery. The following gentleman will serve as pallbearers; Steve Efird, Paul Browning, Jeff Browning, Mike Morris, Ray Seabolt, and Ray Brown. Also, the following gentleman will serve as honorary pallbearers; Adam Clark, Mitchell Henderson, Ben Fitzgerald, and Nikki Smith. Flowers are accepted, or if you wish the family requests that donations be made to Homestead Hospice or the New Liberty Baptist Church Cemetery fund in Charleen's memory. The family will meet with friends from 12:00pm-2:00pm prior to the services on Saturday.

Mountain View Funeral Home of Blairsville is in charge of the arrangements. You may sign the family guest book and send condolences on line at www.mountainviewfuneralhome.com