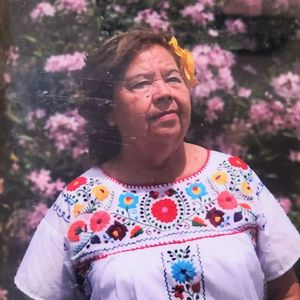 Sending our condolences to the family. Rest in Heaven.

Condolences to the entire family. May she Rest In Peace

My deepest condolences to the family. May she rest in peace.

So sorry for your loss. Condolences to you and your family

Our hearts and prayers are with the Moreno Family

On June 2, 1947, Maria Elena was born to Silverio and Simona Barrios, in the town of Fresnillo, Zacatecas, Mexico. Maria Elena was one of twelve children. She moved to Los Angeles in 1966, at the age of 19, to make a better life for herself and her family. In 1967, Maria Elena met her husband in Los Angeles. Together they raised two children and were married 54 years. Maria Elena enjoyed cooking, especially posole and nopales; going to casinos in Las Vegas, and scratcher tickets. She enjoyed the company of her four sisters and five brothers, listening to Tamborazo music, and spending time with her immediate and extended family. Most of all, Maria Elena, affectionately called Amá, enjoyed the company of her five grandchildren and two great grandchildren. On October 6, 2021, Maria Elena was called home to be with our Lord Jesus Christ. She is preceded in death by her parents and two other siblings. She is survived by her husband, son, daughter, daughter-in-law, five grandchildren, two great-grandchildren, nine siblings, and countless cousins, and nieces and nephews.