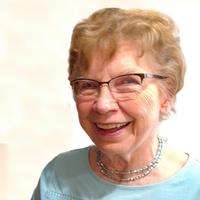 When I was a student at Wheaton College (1968-1972), Marie was a secretary in the Conservatory office. She was always so kind and patient, helpful and encouraging. She showed a lot of care to students who needed encouragement. Marie was like a mom to all of us and was a calming influence. Everyone loved her. Our paths crossed again many years later at Windsor Park. Her cheerful spirit had not changed one bit. Roy and Marie faithfully attended the worship services at Windsor Park. It was...

Mom taught me to pursue what is true, defend what is good, and enjoy what is beatiful. She was tenderness embodied.

I will always remember when Marie, Vera (John's mom) and I went to lunch at Shoppes on Grand in Ames. We had such a fun time. I'm blessed to have known such a special lady. Thinking about all of you. John and I are saying prayers for you and sending our love. Hugs.

Our beloved Marie is gone. What a loss! She was so kind , caring and helpful in every way and she leaves so many warm memories. My sympathies to every family member.
Karin Edwards (and Mark)
Faculty, Conservatory of Music, Wheaton College

Praying for peace. So sorry for your loss.
Sherri Tillery

Jesse and I miss you so much. I was greatly affected by your death. You were like a mom to be and made me feel safe. May God bless and be with Uncle Roy, your children and grandchildren. RIP, Aunt Marie and I will see you soon. Love you so much!

Get email updates about Marie Comstock delivered directly to your inbox.

Marie Pippert Comstock, age 89, died on Wednesday, March 11, 2020, in the home she shared with Roy, her husband of 69 years, at Covenant Living at Windsor Park, Carol Stream, Illinois.  She was born July 3, 1930, in rural Mason City, Iowa, to Harry and Magda Pippert.

Marie grew up on the Pippert farm with her six beloved siblings, Lois, Paul, Chuck, Wes, Harriet, and Harold. She graduated from Nora Springs High School and studied at St. Paul Bible College in Minneapolis. She and Roy married in 1950 in Mason City. In 1960, they moved to Wheaton and there raised four children: Gordon Lee, Gary Lynn, Dawn Marie, and Douglas Roy. Her greatest joys were her family and Christian faith.

Marie was Secretary to the Dean of the Wheaton College Conservatory for three decades (1963—1996). When a journalist wrote a feature story about her for the Wheaton Record, he emphasized the warm relationships “Mrs. Comstock” formed with students. Those relationships led dozens of Conservatory students to come to refer to her as “Mom.” She was also revered by the faculty she served. Upon her retirement, Professor John Zimmerman composed a song in her honor, Marie. The four children and their spouses, like Roy, were devoted. A son reflected some of their feelings when he dedicated a book with these two sentences. “Children are fortunate when they believe with reason that their parents are the best parents in the world. But I am more fortunate still, because everyone I know says my parents are the best parents they know of, too.”

Marie was renowned for her open home. She had the uncanny knack of always having a warm apple pie coming out of the oven whenever visitors, of whom there were many, would show up at the door. This was true no matter how unexpected a person’s sudden appearance may have been or for how long they would accept her invitation to stay—some of them for months. She was kindness embodied, spreading peace and calmness around her. As her grandchildren sat quietly beside her in church, she would gently massage their hands.

She was preceded in death by her parents; her siblings, Lois, Paul, Chuck, and Harriet; a daughter-in-law, Emily Goyer Comstock, Doug’s first wife; and an infant grandson, Sam Richard Comstock, born to Gary and Karen.

A memorial service will be held on Saturday, August 7th at Wheaton Bible Church, 27W500 North Ave., West Chicago, in the east chapel at 10:00 a.m.  For those unable to attend the service in person a livestream link may be viewed here: Roy & Marie Comstock service