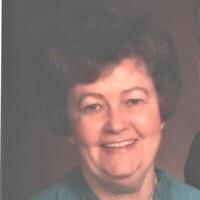 Marilla and Dale were our dear next door neighbors for over 30 years and the first ones to greet us with a homemade pie when we moved in. Marilla was always so genuinely sweet and loved her family. She left behind a wonderful legacy.

Aunt Marilla was my dad's older sister, and I have many fond memories of her and her family. I always thought she had the most beautiful name, and I remember that she had a kind and gentle spirit. It was obvious that she loved and treasured her husband and family, and she had a heart big enough to welcome all.

The last time I visited the McGregor clan in Texas was when I lived in Tulsa, OK and came to Texas for a scientific conference. I was only able to spend one afternoon with...

Get email updates about Marilla McGregor delivered directly to your inbox.

Marilla Cynthia McGregor 95, of Decatur, Texas passed away on September 22, 2021 in Decatur. She was born on September 23, 1925 in Tuscola, Illinois to George and Nellie Logan.

She married Dale Eugene McGregor on June 26, 1953, he preceded her in death after 56 years of marriage. She graduated with a Bachelors Degree from the University of Illinois and a Masters Degree in Psychology from Southern Methodist University.

She worked for ARCO Oil and Gas as an assistant to the Company Psychiatrist. She enjoyed knitting, camping with Dale and the kids, and grandkids. She traveled to Scotland, London. She enjoyed cruises and visiting State Parks in Texas, and was an avid bridge player. She knitted sweaters, blankets and Christmas stockings for her children, grandchildren and great-grandchildren. She attended Grace Baptist Church in Decatur, Texas.

She was preceded in death by her husband, Dale Eugene McGregor, son, Steve McGregor, son in law, Charles McLaughlin, her parents George and Nellie Logan and brother, Edwin Logan.

The family will receive family and friends on Monday, September 27, 2021 from 10-11 AM in the Chapel of DeBerry Funeral Directors in Denton, Texas. Funeral services will follow at 11:00 AM, in the Chapel with Bro. Bill Hughes, former associate pastor of Grace Baptist Church of Decatur, TX., officiating. Interment will be held at Restland Memorial Park at 1:30PM in Dallas, Texas following.