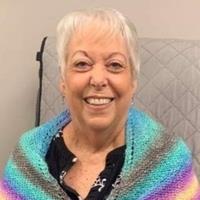 You were a wonderful ,funny , kind , caring classmate. You went to early and you will be missed.

Condolences to the Family. Former Student

Marilyn was a great friend and true lady. She was an excellent worker and caring individual. You could see Jesus in her words and actions. She was a true blessing in my life.

So sorry to hear about Marylyn. Obviously Marylyn is in a much better place now. Our prayers are with the family. Many great times at WHS with Robbie, Theresa and Marilyn!

I am so sorry. Marilyn was a wonderful lady and I will miss her. I remember the great times we had doing Monday night football dinners. Prayers for all the family.

I didn't know Marilyn. I only met her once or twice but I know she's going to be dearly missed by her friends and family but especially by Gary. I pray for the peace that knows no understanding.

I was so very saddened to hear of Marilyn's passing. I have nothing but wonderful memories of her and her beautiful smile.

I didnt know Marilyn very much,but I know she was a great lady. The family lost a wife,mother but God needed another angel. She will always be there with you and the boys.

Sending prayers up to the family at this time. They always say the good ones leave us way too soon and she must have been one of the good ones.

Get email updates about Marilyn Rollings delivered directly to your inbox.

It all began April 9, 1954, when Norval and Anna Sells were blessed with a baby girl.  Marilyn Kay was born in Ganada, Texas.  She attended Stephen F. Austin Elementary in Edna for 1st and 2nd grade and then we moved to Cypress where she attended Lamkin Elementary.  When she was in the 5th grade we moved to Markham, Texas and she attended Tidehaven Middle School.  Later our family moved to Waller, where she graduated from Waller High School in 1972.  Marilyn furthered her education at Blinn Jr. College and graduated in 1977 with a Bachelor of Science Degree from Texas A & M University.  Whoop!

Marilyn married Gary Rollings in November 1978.  He was the love of her life for almost 41 years.  Marilyn had the joy of being a mom to Gary’s sons Brian and Brett.  She and Gary built a wonderful life together at 32210 Divot;  a life full of treasured friendships, amazing memories, a life of tears and happy times, and a life of joyful celebrations.  In recent years, Marilyn and Gary enjoyed their travel excursions with Don and Betty – oh the laughs and fun times they shared.

Marilyn and Gary were faithful members of Pine Island Baptist Church.  Marilyn has been actively involved in the Women’s Ministry, the Food Ministry and other activities at PIBC.  We think these verses fit Marilyn to a T – “She is clothed with strength and dignity without fear of the future.  When she speaks, her words are wise, and she gives instructions with kindness.  She carefully watches everything in her household and suffers nothing from laziness.  Her children stand and bless her.  Her husband praises her.”  Proverbs 31: 25-28.

Marilyn began her teaching career at Waller High School in 1980.  She taught English and business classes at the high school for 9 years.  She left education for 11 years and worked in the business world.  She worked with Gary at TST Supply and later at American Student Travel.  In 2001, she went back to education and taught English and reading at Waller Jr. High until her retirement in 2016.  No greater honor was bestowed on her than being named District Teacher of the Year in 2006.

Marilyn was active in her community as well . . . she was one busy lady.  She and Gary went on their 1st mission trip to Kenya, Africa in 2007.  Marilyn loved working with the children who made their home at Little Eden.  She and Gary “adopted” two little boys from the orphanage. She loved all the children and staff and was so proud of all their accomplishments.   She was devoted to the annual Little Eden Fundraiser and worked hard to make it a success.  Mike and Sylvia recognized her in 2017 for her work with Little Eden and Mike Eden Ministries.

After her sister Theresa was diagnosed with cancer in 2006, Marilyn became very active with the Relay For Life of Waller County.   She served on the Event Leadership Team, as a Team Captain for PIBC and was basically Theresa’s “go-to person”.

Marilyn was diagnosed with Stage IV colon cancer in May 2019.  She had learned in the spring that her liver was compromised because of rheumatoid arthritis medications that she had taken for many years.  The chemo treatments compounded the issues and caused liver failure.  She went to her eternal home on Friday, September 27, 2019.

A Memorial Service will be held for Marilyn at Pine Island Baptist Church on Saturday, October 5 at 10:00 am, Tom Dobbs officiating.  The church address is 36573 Brumlow Road, Pine Island, Texas. In lieu of flowers, donations may be made to Mike Eden Ministries or the American Cancer Society’s Relay For Life of Waller County (www.relayforlife.org/wallercotx)

Marilyn is in the care of Canon Funeral Home.