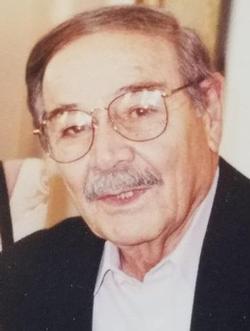 Dr. Di Nello, his wife and his music were such a blessing at church. A beautiful and sweet couple.

So thankful you each have blessed memories to cherish.

Our condolences to the family.

Dr. Di Nello was my instructor at TWU. I was blessed to have an instructor so kind. His knowledge of reading instruction was amazing. My love of teaching reading is a result of his instruction. He will be missed.

Dr. Di Nello was one of my favorite instructors at TWU. He was a gentle soul and his passion for teaching reading was infectious. I remember checking with him about my grade one semester and wanted to know if I had an A in his class. He said, "No but you have a really strong B" Loved his sense of humor. I worked a little harder and earned that A! I reconnected with him in the early 90's when his granddaughter, Cherie, and my daughter, Stacy, became friends at Sam Houston Elementary....

Mario and my dad, Howard Stone, met in New Mexico in 1951. They both moved from ENMU to TWU in 1970. Mario and Marilyn were a great godly couple and they were like family to us. Mario was full of sage advice for myself and my brothers through our teen years and beyond. I will never forget them. Upon my father's death in 2003, Mario, through his tears told me, "that was the best friend I ever had". We all felt the same way about him. I am sad that you're gone but happy to know that...

This morning, I am remembering my Uncle Mario and am thankful for his influence in my life. His visits during my growing up years were marked by his wonderful sense of humor. Later, Uncle Mario stood in for my Dad (his brother) at our wedding's rehearsal dinner. His kindness and concern was a model of how life should be lived. A few years later, as my wife and I moved from Albuquerque to Port Neches, Texas, Uncle Mario and Aunt Marilyn invited us to stay with them in Denton. Those few...

We hold Mario & Marilyn in our hearts forever. We pray that our Lord Jesus will comfort the family that remains until we can be reunited in Glory. Oh Happy Day!

How could I possibly Thank you enough for all the night and days you and Marilyn spent watching over my children. Thank you for the being the rock and steady constant in the family Love and admiration. We will see you both one day.

HOW WE WILL MISS HIM OUR DEAR NEIGHBOR MARIO. REST WELL MARIO.

Get email updates about Mario Di Nello delivered directly to your inbox.

Mario Carlo Dominic Di Nello was in Youngstown, Ohio, on July 31, 1921. Hospital personnel couldn’t quite understand his mother’s thick Italian accent, so they put “Charles” on his birth certificate instead of “Carlo”. He was a beautiful little baby with jet-black hair who would eventually grow up into a handsome young man with movie star looks! Mario’s father, Phillip, came to America through Ellis Island, and his wife, Maria, followed him a year later.

Soon after Mario’s birth, the family moved from Youngstown to Raton, New Mexico where his father worked in the coalmines. In the 1920s there were very few Italians in northern New Mexico, so Mario and his family often found themselves disliked and misunderstood as “foreigners.” But the close-knit Di Nello family completely embraced the American dream. A core value Phillip & Maria instilled in Mario was to never look down on others – a credo he lived by throughout his 95 years.

Because he didn’t speak a word of English, Mario failed 1st grade. His mother attended school with him so she could learn English with him. Mario was a bright young man who soon began to excel in school, and he also became an accomplished musician. After his first year of college at New Mexico State University in Las Cruces, Mario was asked to play with the Raton Community Band for the XIT Reunion in Dalhart, Texas. The crowd was stunned by this trumpeter’s clear and beautiful tone, as he closed the event with Taps. It was there that he met Marilyn Harrell, a gorgeous young cowgirl who would become his forever love. They were to be married for 69 years.

That same fall, Mario transferred to Eastern New Mexico University (ENMU) so he could get better acquainted with Marilyn. The two fell in love and were married on December 28, 1941, just after the attack on Pearl Harbor. Mario joined the Army as a part of the Signal Corps, but he severely injured his knee in training and was never to see action. After the war ended, he worked toward his degree in music education and Marilyn and he moved to Arizona and California before returning to Loving, New Mexico for his first teaching job. Mario had found his calling. He loved teaching and helping shape the lives of children, and children loved Mr. Di Nello! Along the way, Mario & Marilyn had a little girl and boy, Lynn Ann and Robert. Mario later taught in Carlsbad, New Mexico and also worked towards his master’s degree in education at ENMU.

He was offered a teaching position at ENMU in Portales where he excelled in the Education Department with a specialty in Reading. This led to a two-year sabbatical at the University of Iowa, where he completed his PhD in Reading. He was immediately offered teaching positions at Temple University and the University of Washington, but Mario returned to ENMU to teach for several more years. Then, in 1967 his career in education skyrocketed when he was invited for a full professorship at Texas A&M University. There was, however, one final step in his growing resume when he settled at Texas Woman’s University in Denton in 1970. During his time in Denton, Mario developed one of the most respected and successful reading remediation programs in the United States. While at TWU he became a published author, and he received a two-year appointment to serve as the senior official for all reading programs throughout the public school system in Texas. Aside from the honors and accolades, Mario never lost touch with why he was called to be a teacher. At every level of his success, there were hundreds of students who would write or call him to say, “Thank you for everything you did for me as a student. You changed my life for the better in so many ways.”

For several years toward the end of his teaching career, Mario & Marilyn dedicated their love to helping raise four of their grandchildren. They were loving and wonderful grandparents who helped instill their deeply held Christian faith in these four little ones. Faith in Jesus was, in fact, the driving force throughout Mario’s life – the one constant that always kept him steady in this changing world. He lost his wonderful Marilyn on May 5th, 2011. Even in the midst of struggling with Alzheimer’s over the past 6 years, Mario still kept his sense of humor. With the help of wonderful caregivers, he was able to stay in his home where he died late Thursday evening.

Mario was one of a kind – a true man of character in this world that has fewer and fewer such men. He lived by the principal that, “If you don’t stand for something, you’ll fall for anything.” This wonderful man, Mario, stood for something, and this world’s loss is most certainly heaven’s gain.

Mario is survived by his daughter, Lynn Ann Bogard, and his son, Robert Philip Di Nello; his grandchildren Philip, Cherie, Chanel and Jared Di Nello; and, his son-in-law, Craig Bogard.

He was preceded in death by his wife, Marilyn, his brothers, Ed & Guilio Di Nello, his father and mother, Phillip & Maria Di Nello and his grandsons, Daniél & Dustin Bogard.