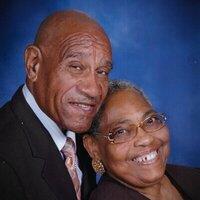 Uncle Martin, You will be missed. Your joy for life, golf, and the love for your family is something that I will never forget. I am so grateful for your life. I love you.

With Love and Respect for a beautiful and wonderful couple. God can only hold you in his favor. We will forever love and miss you.

We will truly miss you Mr Bennet. You and Mrs Bennet were such a beautiful loving couple. You were some of the best neighbors any one could ask for.
Your beautiful children always were a testament to what a close family you all have been. We will cherish many good memories in our hearts for you and Mrs. Bennett forever.

Thank you for being such a beautiful blessing to so many! I love you Bennett Family!

Mr. & Mrs. Bennett were one of the sweetest couples I was blessed to know.

He will be truly missed grateful for the time he was here with us. May God put his loving arms around the family and keep you close to him during this time of bereavement.

Get email updates about Martin Bennett delivered directly to your inbox.

In lieu of flowers, memorial contributions can be made to The Salvation Army Center of Hope, 4015 Stuart Andrew Blvd Charlotte, NC 28217. Noting in memory of Mr. Martin Bennett.

Obituary for Martin and Sarah Bennett

The most beautiful love story of two souls that were called to heaven.  Sarah and Martin Bennett were a loving and dedicated couple, who were devoted as husband and wife, as parents, grandparents and friends to so many.

Sarah retired from Greensboro City Schools as a supervisory cook and later worked for Shipman Healthcare as a client caretaker. She was most known for her home cooking and would feed any soul she touched.  Sarah was a member of the Magnolia Chapter #23 Order of the Eastern Star.

Martin Bennett (aka Bubby or Bubba) served in the United States Army as a World War II veteran and retired from the United States Postal Service as a groundskeeper for over 30 years.  He had a passion for golf, lawncare and was known for keeping his yard well manicured and beautiful  He also loved to teach people how to maintain a healthy yard. He was a lifetime member of the Invincible Masonic Lodge #251 in Greensboro, NC.

Sarah was preceded in death by Ella Ray Harrell and Lexie Blackmon Harrell (parents) and nine siblings. Martin was preceded by Ester and Martin Bennett (parents) and two of fourteen siblings. He is survived by two sisters Mrs. Helen Huntley of Winston-Salem, NC and Mrs. Aggie L. Joins (Bonzell) in Detroit, Michigan.