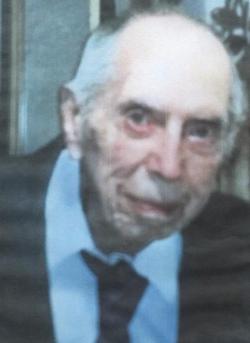 Maury: The world just became a little less joyful when I heard of your passing, but you have earned a well-deserved seat in our eternal Father's Heaven. You have been a most wonderful friend and mentor when I needed guidance the most. God Bless you, your bride Anne, the chip off the ole block, Neal and all his family. Until we meet again, your friend, Tom.

Get email updates about Maurice Connors delivered directly to your inbox.

Maurice Connors was a resident of the Atrium of Belleville for nearly five years after moving to the area from Chicago with his wife of nearly 57 years, Ann (Hayes) Connors.  He departed this life after living his values for nearly 103 years white attaining many milestones along the way.  He was born April 9, 1915 on the north side of Chicago.  Athletics played a major part in his life.  He won races in the Chicago “silver skates” speed skating competition of that era.  During WW II he served in the United States Navy.  Thereafter, he attended night school and graduated from Northwestern University and received an MBA from Northern Illinois University.

Maurice was executive assistant to the first President of the Airline Pilots’ Association (ALPA).  Later he became personnel director.  Later he became personnel director at Standard Kollsman which manufactured television components for many of the major television manufacturers for several decades.  He loved music and played and taught guitar and banjo.  He was a lifelong member of the American Federation of Musicians, performing in numerous musical groups throughout the Chicago area.

He was an active sports’ official for football, basketball and baseball at all levels. In 1989 he was named baseball umpire of the year by the Umpires Protective Association (UPA) in Chicago, and in April 2008 he was inducted into the Athletic Officials’ Association (AOA) Hall of Fame.

He is survived by his loving wife, Ann; his son, Neal resident of Belleville; as well as grandchildren, Cole, Carmen, Layla, and Genevieve.  Prior to attending St. Peter’s Cathedral Parish in Belleville, he belonged to St. John the Apostle Catholic Church in Villa Park, Illinois for more than fifty years.