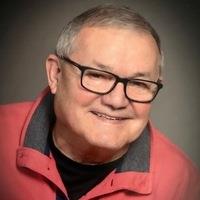 I remember the sandwiches! we would go there and get them on lunch break. even if we did not have all the money mary would give us food until payday. I will never forget how they helped us for years

Margie and family...So sorry to hear of Mike's passing. He will certainly be missed by all that were blessed to know him! May God be with you at this time.

Seeing Mike behind the counter in the deli was always a signpost that I was home. My heart hurts for you Margie, your family, and for the town who loved him too.

My thoughts and prayers are with you , Margie and your family at this difficult time.

So sorry for your loss, may God bless your family through your loss.

Our thoughts and prayers are with your family through your loss.

So very sorry to hear about Mike. He was a wonderful friend for many years.

Get email updates about Michael "Mike" Begley delivered directly to your inbox.

Mass of Christian burial will be on Thursday, October 22, 2020 at 10:30 a.m. at St. Benedict’s Church with Rev. Jeremy Heppler, OSB as celebrant. Interment will follow in Mt. Calvary Cemetery. A parish rosary will be recited on Wednesday, Oct. 21st at 6:30 p.m. with visitation to follow until 8:00 p.m. at the Arensberg-Pruett Funeral Home. Memorial contributions are suggested to St. Benedict Catholic School or Maur Hill-Mount Academy and may be left in care of the funeral home.

He proudly served his country in the United States Navy from 1963 until his honorable discharge in 1967.

He and the former Margie A. Miller were united in marriage on May 4, 1968, at St. Benedict’s Church.

Mike has owned and operated Paolucci’s Deli - Restaurant and Lounge alongside his wife for over 50 years. He previously was employed with Missouri Pacific Railroad.

Mike was active in the Atchison Community; he was a member of St. Benedict Parish, the Sacred Heart Council #723 of the Knights of Columbus, Fleming-Jackson-Seever Post #6 of the American Legion, V. F. W. Post #1175, Atchison Elks Lodge and Bellevue Country Club. He enjoyed playing golf and played in countless tournaments over the years. In 2008, he was awarded the Grand Marshall of the St. Patrick’s Day Parade.

He was preceded in death by his parents, a brother, Joe Begley and a sister, Rosemary Weber.