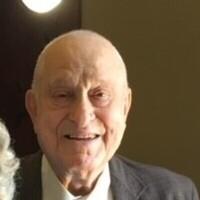 Janna and family, My deep sympathies for the loss of your dad. I did not know Millard, but from your description he was a neat guy that I would have liked. I'm sorry not to write a personal note but could not find an address for you. I will keep you in my thoughts and prayers. John McCord

Millard was already a kind and decent man, and Merline softened him up even more. A tree is known by the fruit it bears, and Janna, Bob, and John, y'all can be proud of him. He is with the Lord this day.

Im gonna miss him so much. Even tho he wasnt blood he was still my grandpa. He didnt treat me any different than his real grandkids. One of the best men ive ever known. Love you grandpa until we meet again. Bob and John let me know if you need anything. Give grandma a hug from me love yall.

John and Bob I’m sorry to hear about your dad’s passing,he was a great man!

Get email updates about Millard Pitts delivered directly to your inbox.

Mr. Pitts was born in Pike County, GA on November 30, 1931, son of the late Howard Beachum Pitts, Sr., and the late Iva Beatrice Buchanan Pitts.  Being born during the Great Depression resulted in a lifetime of frugal living and hard work.  Orphaned at a young age, he understood the importance of family; he and his two brothers and sister formed a strong family unit.  He attended Spalding County High School and was a veteran of the United States Army, serving during the Korean War.  He enjoyed watching western and war movies that he had seen multiple times, enjoyed Archie Bunker and Andy Griffin Shows but held disdain for Johnny Dept, who ruined his memory of the Lone Ranger. Prior to his retirement, he was an employee of Sonat Gas Company.  Mr. Pitts was a member of the Lindale Lodge #455 F. & A. M., was a Shiner, and was of the Baptist faith.  In addition to his parents, he was also preceded in death by a son, James Douglas (Jim) Pitts and by 2 brothers, H. B. Pitts, and John W. Pitts.

The family will receive friends at Henderson & Sons Funeral Home, South Chapel, on Tuesday from 12:30pm until time for the service.