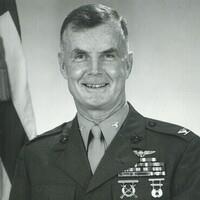 Very, very sad to hear of the passing of Col. PJ Jones. I was his roommate, classmate and company mate at US Naval Academy Class of 1962. Last saw PJ at Col. Bill Gage, USMC ret. 's funeral service and later saw PJ in Newport, RI at dedication of John Ripley, Col. USMC building at Naval Academy Prep. School. PJ had an illustrious career and served his country with great distinction and dedication. May God Bless his noble soul and his family. Sincerely, William H. Ise', CDR USN Ret. ...

Rest In Peace, P.J. From the testing at Lakehurst to the Happy Hours at MCAS Beaufort and MAG-11 in DaNang, I admired your leadership and valued your friendship. When relocating to New York City, I always thought you when dining at what was my favorite restaurant that you introduced me to - Mamma Leone's. My one regret is that out paths didn't cross again after Vietnam

God bless you Banshee, and may you rest in peace.

I first met PJ in Vietnam, and served as his AMO later in VMFA 115 where he was XO. PJ and I brought 115 back to CONUS from Iwakuni in 1977. He was always a gentleman and fantastic Marine Officer with a great Irish sense of humor. He will be sorely missed.

The pipes have called to Patrick, brother of Kathleen Martino. Thank you for your service to our country, Pat, and thank you for being such a wonderful big brother to Kathy who will miss you dearly.

Our sincere condolences to the Jones family. I met Col Jones in 1989 when I was assigned to MATSG as a flight instructor. He was a superb leader and one that we all looked up to. It was good fortune to join with the PYC Marines and get reacquainted with PJ when we moved to Pensacola three years ago. We will miss you but you will not be forgotten!

Thank you for providing Patrick's obituary. It made me feel so proud to read about all of his accomplishments especially when he came from such a humble background.
My memories of Patrick go back to our Albany, NY, Delaware Ave. neighborhood where our families lived. As the saying goes, "there is a woman behind every successful man." In Patrick's youthful life, that woman was his mother. They both looked so much alike. She was a humble, pleasant, soft spoken,...

Heart felt condolences to PJ’s family.....he was our Pensacola Leader who brought us all together, bonding Marine camaraderie.....

Our sincere condolences to the Jones Family. Our thoughts are with you all at this sad time. RIP Pat Jones. Maureen & Andy Magan..Kathleen & Tim Masterson..Nora Rowland & Peter Malone..Ireland..

A True MARINE , and Friend . He will be Missed by all that knew Him . My Truly Sympathetic Love to All The Family
SEMPER FI , MY FRIEND

Get email updates about Patrick Jones delivered directly to your inbox.

Colonel Jones enlisted in the Marine Corps at Albany, New York, in August 1956. Upon completion of Boot Camp at Parris Island, South Carolina, and Infantry Training at Camp LeJeune, North Carolina, he received orders to NAS Jacksonville, Florida where he attended the Naval Aviation fundamental School and Aviation Electrician "A" School. Upon completion of these schools he was transferred to Marine Corps Air Station, Opa Locka, Florida, and joined VMR - 353 for duty. While at MCAS Opa Locka, Private First-Class Jones received a Secretary of the Navy appointment to the U.S. Naval Academy and was transfer to the Naval Academy Preparatory School at Bainbridge, Maryland. Corporal Jones entered the U.S. Naval Academy as a Midshipman in June 1958, graduated in June 1962, and was commissioned a Second Lieutenant in the Marine Corps. He completed the Basic School at Quantico, Virginia, in December 1962, and received orders to NAS Pensacola, Florida, as a Student Naval Aviator. First Lieutenant Jones received his aviator wings in June 1964. He proceeded to Marine Corps Air Station, Beaufort, South Carolina, and joined VMFA(AW)-235 flying the F-8E Crusader. In December 1965, he deployed with the squadron to MAG-11, Da Nang, Republic of Vietnam. During this tour Lieutenant Jones flew combat missions in the F-8 and O-1C "Birddog". Upon completion of this overseas tour Captain Jones received orders to the U.S. Naval Postgraduate School, Monterey, California.  He completed this duty under instruction in June 1969, and was awarded a degree in Aerospace Engineering.

Upon completion of transition training in the F-4B "Phantom", Captain Jones was again order to MAG-11, Da Nang, Republic of Vietnam. During this tour he flew combat missions in the F-4, TA-4-F, and OV-10A aircraft.  During December 1970, Captain Jones received orders to the U.S. Naval Academy where served as an instructor in the Engineering Department and as a Company Officer in the Executive Department. At the completion of this tour of duty in July 1974, Major Jones was transferred to the Marine Aviation Detachment, Point Mugu, California, where he served as Project Officer, Program Manager, and Executive Officer.

Colonel Jones served on the staff of DC/S for Aviation of HQMC from June 1980, to June 1982. During this time, he was selected for Top Level School and attended the Naval War College in 1983. upon graduation, Colonel Jones was assigned as the Commanding Officer, Marine Corps Air Station, Beaufort, South Carolina. From June 1985 to July 1987, he commanded MAG-41 at NAS Dallas, Texas.

After retirement in 1990, P.J taught 9 years at Pensacola Catholic High School. He played golf 3 days a week until his death.

He is preceded in death by his parents, Leonard Jones and Bridget Roland.

The family will receive friends Saturday, December 5, 2020 at 10:30 am, followed by a memorial service at 11:00 am at Harper-Morris Memorial.