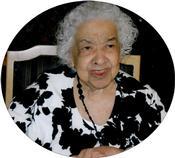 My condolences to the family. May the God of comfort who promises to "wipe every tear" from our eyes and "death will be no more" strengthen your family in this time of loss.

So sorry to hear about Mama Pearl's passing. My mother was at the assisted living home with her last year and she always had a smile on her face and would always acknowledge one when talked to. I know she will be greatly missed by family, friends and staff at Fenwick Landing.

My condolences to the family of Pearl. May all the wonderful memories of her sustain you until God's promises are fulfilled. John 6:40

I was deeply saddened to hear of the death of Aunt Pearl. My most sincere condolences to the family.

To the family of the Pearl C. Thompson Furey,

Amen, Amen, Amen...What a life and legacy Cousin Pearl has left all of us. Her determination and conviction to education and life are to be modeled by all of us. 107 years of life, faith and family.

What a wonderful story.

May God strengthen you during this your time of loss. God knew best and called His loved one home.

Im sorry for your lost. Please find comfort and hope that soon God will eliminate all suffering here on earth including death.(Apocalypse 21:4) My prayers are with the family.

MAMA PEARL GOD CALLED HIS BEST ANGEL HOME, MY CONDOLENCES TO YOUR FAMILY, YOU WILL BE DEEPLY MISSED

Get email updates about Pearl (Thompson) Furey delivered directly to your inbox.

Furey, Pearl Celeste Thompson (Age 107) of Bryans Road, Maryland. Pearl Celeste Thompson Furey was born February 2, 1906 in Bryans Road, Maryland to the late William H. and Thelery A. Marbury Thompson. Mrs. Furey received her education at Simms Hill School, Bryans Road, MD and Pomonkey School. After graduation from Pomonkey High School, she went on to earn a Teaching Certificate from Bowie Normal School (later Bowie State College, now Bowie State University) in 1927. While teaching, she continued her education at Morgan State College (now Morgan State University), Baltimore, MD , earning a Bachelor's Degree. She attended New York University during the summer months to pursue a master's degree in education. Because of the long commute, she stopped with only eleven credits left to complete. A pioneer in the education system in Charles County, she spent forty-four years in the classroom, most of those years teaching in segregated schools offering black children a foundation for a good education. She enjoyed talking about teaching. There was a shortage of teachers in the rural areas. School was often closed or interrupted because of the shortage of Black teachers. These conditions prompted her to pursue a career in education. Immediately after earning her Teaching Certificate from Bowie Normal School, she began teaching at Federal Hill School in Charlotte Hall, MD. It was a one-room school with a small kitchen and cloakroom. Mrs. Furey had to rely on her imagination and creativity and use what was available to come up with teaching aids. Corn supplied by farmers became learning tools. She said she used the kernels to form letters and numbers and to teach students to count. She administered medicine (usually a homemade remedy that her mother had used) to treat colds, coughs and rashes. She collected clothing and shoes to give to the children. In the winter, there was always a pot of beans on the stove cooking for lunch. Students remembered her long after they left her classroom. She also taught at Pomfret, Oak Grove, LaPlata and Port Tobacco Schools. Mrs. Furey's passion for teaching inspired some of her students as well as family members to pursue careers in education. After retiring, she enjoyed traveling, sewing, bowling, and gardening. Even though she thought she was not very good at it, she enjoyed making quilts. She often compared her life to a quilt. She said, "The way you make a quilt is how your life is made, one piece at a time". She was a lifelong and faithful member of Metropolitan United Methodist Church and a member of the United Methodist Women. She was also a member of Truth Chapter #19 of the Order of the Eastern Star. Pearl Celeste Thompson Furey was preceded in death by her husband, Randolph Furey, daughter, Sylvia Roberta Mason Posey, sisters Alice McCaskill, Virginia Thompson, Gloria Lewis, Jane Potter, Ruth Swann and Mildred Thompson; brothers James, Richard, Stayman, Sydney, Hosea, Daniel and Joseph Thompson.Peacefully on Tuesday, November 19, 2013 at the Fenwick Landing Assisted Living Center in Waldorf, Maryland. Pearl C. Furey transitioned to eternal life. She is survived by two sisters-in-law, Connie and Elvay Thompson, eleven grandchildren, thirty three great-grandchildren, twenty six great-great grandchildren, three great- great- great grandchildren, and a host of nieces and nephews.Viewing, 9am until time of Service, 11am, Tuesday, November 26, 2013 at the Metropolitan United Methodist Church, 3385 Metropolitan Church Road, Indian Head, Maryland. Interment, Church Cemetery.