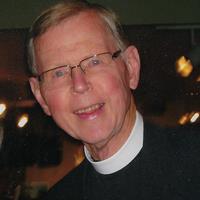 I learned of Pastor Phil’s death while reading The Living Lutheran magazine. I am sad for Joan and the family. They were friends from our days at Luther College. I am thinking of the song - My Life Goes On In Endless Song. What he gave to so many in his life will live on in their hearts. Rosalie Grangaard Grosch

I have many good memories of a great pastor and neighbor.

Fond memories of Phil's time at St. Stephen. Our thoughts and prayers are with Joan and the family. Honore & Jim Pierce

Pastor Ramsey was so helpful to my family when my father passed away. He will never be forgotten

Never to be forgotten. I knew Pastor from Church Youth group in Midlothian, IL

We were connected by St. Stephen Lutheran Church where we both served. God comfort his entire family.

Phil was a friend, a mentor and brother in Christ. Peggy and I are saddened of his death.

Joan, Chris,and Laura, the entire Gorz family are deeply sorry for the loss of your father.
We will keep you in our thoughts.
Thomas Gorz

The Peace Hospice team wishes to express our sincere condolences to Philips family and friends. We are honored that we could provide care and companionship to Philip and his family on his final journey. Our thoughts and prayers are with you during this difficult time.

Get email updates about Philip Ramsey delivered directly to your inbox.

Phil was born on June 20, 1936 in rural Iowa. He lived with his family in the house on their farm. The summer of 1936 had record heat, and because of the heat, there was serious concern that Phil would live. A pastor was called to the house, and Phil was baptized at home.

Phil had two older brothers, LaVerne and Donald, and an older sister, Lou Ann. The men farmed and lived in the farmhouse. Lou Ann lived in Mason City where she taught school. She came home to the farm on most weekends.

The family was active in the faith life of Beaver Creek Lutheran Church located nearby. Phil attended the country school and the high school in Joice, Iowa. He was active in speech and drama clubs. After school and in the summers, he worked on the farm.

Phil graduated from high school in 1954 and then entered Waldorf College in Forest City, Iowa. He sang in the college choir and toured the Midwest with them. He also sang with the men’s quartet and toured in the area.

After two years at Waldorf, Phil entered Luther College in Decorah, Iowa. He majored in history and graduated in 1958. Phil began working as a youth director in a church in Red Wing, Minnesota. His plan was that after two years, he would become a student at Luther Seminary in St. Paul.

Phil graduated from Luther Seminary in May 1962. He was ordained in his home church of Beaver Creek that summer. During his senior year, Phil met Joan Christian. They were married in August 1962. Phil became the assistant pastor at St. Mark Lutheran Church in Mt. Prospect, Illinois. He and Joan lived in Mt. Prospect for three years.

Their son, Christian, was born in August 1963 while they lived in Mt. Prospect, and their daughter, Laura, was born in June 1966. After three years, Phil became the pastor of Immanuel Lutheran Church in Minonk, Illinois. Then Phil returned to the Chicago area as the pastor of Immanuel in Midlothian. During Phil’s time in Midlothian, the congregation merged with a Missouri Synod congregation after careful planning and became St. Stephen Lutheran Church. More planning followed to build a new church building.

Phil and Joan and their children moved to St. Paul Lutheran Church in Villa Park and purchased a home in 1976. They hosted Markus Schmut, an exchange student from Austria, while their children were in high school. In 1998, Phil retired from St. Paul after 22 wonderful years. Phil and Joan moved to a new home, traveled, and enjoyed their delightful grandchildren.

A private service is planned, with a larger celebration of life service to be scheduled at a later date.