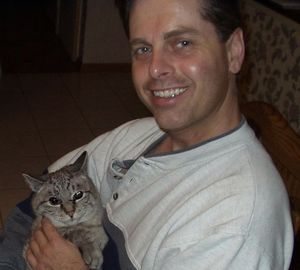 Saddened to hear of cousin Randy’s passing. Lost touch with him over the years and distance but I recall happy times visiting his parents, Uncle Jerry and Aunt Mary’s home in Akron when we were kids in the early 1960’s.
Riding bikes, frisbee, lawn darts. Good memories. Rest in peace Randy and God bless your family.

You are in my thoughts and prayers

In loving memory of a wonderful person. We will love you and miss you always. I will cherish all the great memories our families had together.

Randy Overholt, age 64, of Los Angeles, CA passed away on May 23, 2021.
Born October 18, 1956, in Akron, OH, he was the first of three children born
to Gerald and Mary Ellen (Keagy) Overholt. Randy was raised in Toledo, Ohio.
Randy moved to Los Angeles from Toledo, Ohio in 1977 driving his mustang
cross country. His adventures truly began when he met and married the love
of his life, Deborah (nee Maxwell) Overholt in 1980. Randy had the privilege
to work for several technology and software engineering firms, including Sync
Research, Retix, Ascom Timeplex, Compuserve, Spirent Communications,
Nathan Kunes, Inc., Dell EMC, and finally Nimble Storage, a division of
Hewlett Packard Enterprises. Working for HP was a childhood dream of
Randy's. He was held in high regard by his colleagues for his impressive
knowledge of the test methodologies and software product development.
Randy gave generously of his time with Kiwanis International. He raised
thousands of dollars for Rady Children's Hospital in San Diego, assisted in the
yearly San Diego Kite Festival and Pancake fundraiser, as well as delivering
food to those in need during the holidays.
Randy enjoyed reading, cooking, playing the piano, singing Karaoke, and
pondering the pixelating of the universe and other such cosmic things. He
enjoyed being with lots of people performing and entertaining, appearing in
several films.
Randy is survived by his loving wife, Debbie; children, Eric (Jill) Overholt of
San Diego; Ryan (Mahalia) Overholt of Granada Hills; Chris Overholt of
Woodland Hills; Ashley Overholt of Granada Hills; beloved grandchildren
Kaya, Maxwell, Lincoln, and Quinn Vivian; brother Steve (Janet) Overholt of
Erie, Pennsylvania; sister Lauri (Mark) Brazier of Cumming, Georgia; nieces
and nephews Kristen Overholt; Kalon Overholt; Alexis Brazier; Kelsey
Brazier; aunts Amy Wolfe and Joan Gonder of Akron, Ohio; uncle Paul
Overholt of Akron, Ohio. He was preceded in death by his parents Gerald and
Mary Ellen Overholt.