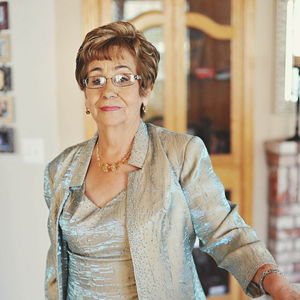 Rebeca T. Rodriguez, 83, born on September 18, 1937, in the pueblo of Tabasco, Zacatecas, Mexico, to Aurora and Pedro Torres. She was the sixth of eight children. Along with her parents, she joins her brothers (Gonzalo, Joaquin, Eliseo, and Fernando) and sisters (Lydia, Bertha, and Raquel) in Heaven.

Rebeca often shared stories of her happy childhood growing up in Tabasco. In an era without street lights, phones, running water, or gas, Rebeca found joy in her family, friends, and imagination. She used spools of thread to fashion high heels and cardboard boxes as beds for her hand sewn dolls.

At the young age of fourteen, Rebeca decided to dedicate her life to God and entered the convent. Her time in the convent was short-lived, however, as her father felt she was too young to make such a lifelong commitment. Don Pedro Torres pleaded with a young Rebeca to return home and even lied by telling her that her mother was very ill. Upon returning to Tabasco, she continued to dedicate her life to God and the Church by becoming the Director of Catechism at the local parish, until she married Santiago Rodriguez in 1958.

As a testament to her courage and strength, she and her husband, Santiago, left for the United States in 1959. Without knowing the English language or having any familial supports, she started a new family. Rebeca's marriage to Santiago Rodriguez in 1958 lasted through his death in 1988.

Rebeca raised six children (Yadira, Sandra, Leticia, Jaime, Alvaro (Hector), and Ana), essentially born one right after the other, and worked hard to provide for them all. In 1971, Rebeca purchased their family home in Glassell Park on West Ave 30. Rebeca worked as a seamstress for Bailey Hat Company on San Fernando Road for over 10 years. In those times, work was compensated by the dozen and, with her skills, she earned quite a bit of money for that time.

In 1996, Rebeca became a U.S. Citizen but always remained proud of her Mexican roots and, particularly, her hometown of Tabasco, Zacatecas. In fact, when meeting people for the first time, if she discovered you, or your family, were born or raised in Zacatecas, your stock automatically rose with her.

Rebeca will be remembered for her incredible generosity, loving spirit, tamale-making get-togethers around Christmas, and her amazing memory. Birthdates, anniversaries, or other important dates in someone's life were never forgotten by Rebeca. In fact, she was often the first call you would receive on your special day. She never missed family milestones and celebrations, an opportunity to let loose on the dance floor, or sit and chat with you for hours on end (if that's what you needed).

Rebeca is survived by her six children, and their spouses, stepson, twenty-six grandchildren, twelve great-grandchildren, nieces, nephews, friends, and countless others who considered her a second mother or second grandmother.

She passed away peacefully with her children by her side on June 3, 2021. She resided in Los Angeles, CA at the time of her passing. Arrangements are under the direction of Forest Lawn, Covina Hills, California.

I will always remember her smile and her kindness. She always mentioned how handsome my boy Orion looked.

Under the lights at dodger stadium. Fernando Valenzuela night.

I absolutely love this picture of grandma and her sisters whom she adored. Grandma taught us that above everything else, family comes first! Our unbreakable bond as a family is all because of her. She was the matriarch of our family and taught us countless traditions that will be passed on to her great grandchildren. Te quiero mucho

We love you so much grandma. I’m going to miss our talks over coffee and the funny stories you would tell us about grandpa, our parents and our childhood. You had a nickname for everyone and those nicknames will never fade. My heart is broken. We not only lost our grandmother, we lost our best friend.

I will never forget those long rides home and all your amazing and funny stories about growing up and raising your incredible family in glassell park. You were a women of incredible strength and perseverance

Back in the day we had a photographer make a house call. I remember this picture because my sisters wouldn’t stop laughing. Mom wasn’t having it. You can see it on her face.