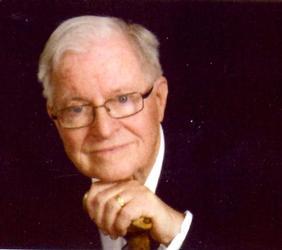 A Man for all seasons, and for all hearts. He taught us all how to live a better life and we followed his example. He was always giving to others and caring for their wants and needs, physically and spiritually. No persons have ever touched me personally as did Paul Stiffler, and his dear wife, Elsie. I hold your spirit in my heart always, and give thanks for all that you gave to so many during your short time on earth. Thank you for all the Blessings you have given us.

I was the organist for a number of memorial services that Paul conducted. He was extraordinarily kind and gentle; it was obvious that he had a special relationship with the deceased person and his/her family. What a comfort he must have been to those who were achingly sad.

It was a joy to work with him.

What a remarkable man Heaven has gained. Deepest sympathies to Jon and the entire family. Hugs and God Bless!

Thru unusual circumstances, I saw the notice of Rev. Paul's passing in the newspaper last night. We knew each other so many years ago, you may not remember our family at Faith United in Brainard. My father, Carl Marshall, so loved Paul-and you all. Indeed your family and our church community was very important to our young family in those days as we were all new to Chicago and far away from relatives. My dad was a very active member in the church at that time and throughout his lifetime....

Elsie and family-my condolences to you in the loss of Rev. Paul. Thru a unusual coincidence, in traveling to Chicago this week, I was given a Tribune on the train. I rarely read that paper any more. In looking thru it last night-I typically glance thru obits in any paper (likely an old person thing)to find the news of his passing. We knew each other in Brainard at Faith United so many years ago you likely don't remember. My father Carl and indeed our whole family loved Rev. Paul and your...

I send my sincere sympathy to Elsie and family. Paul came to CCC just after I was married. He shared many joyous occasions with us, including the baptism and confirmation of my sons. He was there helping us through sad times too. So many memories! He was a blessing to us and will always be remembered.

Rest now my friend and wonderful mentor and colleague. Thank you and bless you Paul for all the Rainbow days and gracious renderings of the Gospel.
Christine Barton -Cadillac MI

Get email updates about Rev.Dr. Paul E. Stiffler delivered directly to your inbox.

Rev. Dr. Paul E.Stiffler, age 88, passed away on July 22, 2016 at Plymouth Place in LaGrangePark, Illinois. Paul was a beloved husband, father, friend, and pastor to many throughout hislifetime. He is survived by his wife, Elsie, his daughter, Cheryl Nelson and her husband Bob, hisson Jon and wife Roxanne, nephew Jeff Wise, seven grandchildren, Michelle Thompson, KyleStiffler, Jennifer Nelson, David Nelson, Rob Nelson, Amy Scanlon-Otterness, and JaredScanlon, and three great-grandchildren, Colby, Joelle, and Rylee.Paul was born in Akron Ohio on April 14, 1928 along with his twin sister, Lois. He spent hisadult life in Illinois and was married to his wife, Elsie in 1950. He received his BA degree fromNorth Central College, Naperville, Illinois in 1950 and became an ordained minister in 1953 fromEvangelical Theological Seminary. He received a Master’s Degree in Divinity from ETS, aDoctorate in Ministry from Bethany Seminary in Oak Brook, and enhanced his extensiveeducation in Oxford, England. Paul was known for his work in Meditation and areas ofSpirituality. He was a pastor in churches for sixty years. A Labyrinth bears his name at FirstCongregation Church of Western Springs. In addition to his many lifetime accomplishments, hepublished two books, “Spiritual Pathways” and “Make Angels in the Snow”.A Memorial Service will be August 6th, 2016 at 2:00 p.m. at First Congregational Church of Western Springs 1106 Chestnut Street, Western Springs, IL 60558 and a Labyrinth Walk will be dedicated to Paul at a later date.