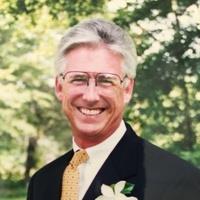 So sorry for your loss. May God bless you and your family in this time of sorrow. In my prayers.

Thinking of all of you in this time of sorrow

No time on earth is long enough to share with those we love or prepare us to let them go. Our deepest condolences to each of Rick's loved ones and friends who are suffering a painful loss. God bless each of you.

In Deepest Sympathy for the family. Rick was a good friend and I always liked working with him on appraisals May God give you mercy and strength in the coming days. Gerry Holliman- Crye-Leike

I grew up with Rick and siblings at Fairview Baptist Church. They were always great people and I know Rick will be missed. As I look at the picture it reminds me that was always the way he was. My prayers are with the family during this time.

Rick is one of the best friends I have ever had. We met through working together and quickly became good friends. For over 30 years, he never forgot my birthday, and he always was so good at keeping in contact with me. He and Cindy loved watching SEC football together, and he came in almost every week to tell me about them having breakfast and then spending the day watching football. My job was to let him know where Stan would be officiating that week so he would know when they watched...

We will truly miss Rick and his kind, gentle presence....the world was a better place with him in it! Our deepest condolences to our Cindy and all of Rick's family and friends.

Get email updates about Rick Adams delivered directly to your inbox.

Roderick Boardman “Rick” Adams, Jr. passed away Thursday, September 9th, 2021, at his home in Columbus, MS, at the age of 64. Mr. Adams was a long-time and prominent member of Columbus’ business community, a loving husband, father and grandfather, proprietor of Adams’ Appraisal, and a frequent and welcome presence on local golf courses.

Born in Panama City, FL on November 29th, 1956, Mr. Adams was the son of Lieutenant Colonel R.B. Adams, Sr. and Mrs. Anne Adams (nee Boswell), both of Macon, MS. The first of four siblings, Mr. Adams spent much of his youth on US Air Force bases until the family settled in Columbus in 1970, where he spent the rest of his life. He completed high school in 1974 at Central Academy in Macon, where he was a standout basketball player.

Graduating from the University of Mississippi in 1982 with a degree in Finance, Mr. Adams began a career in banking with First National Bank of Columbus, remaining with the organization after its purchase by Regions Bank. He later shifted his focus from banking to real estate appraisal, joining the firm Appraisal Services, and eventually founded his own firm, Adams’ Appraisal. He was an active member of the Mississippi Coalition of Appraisers, serving as a two-term president of the organization’s board of directors since 2019.

Mr. Adams was a lifelong amateur athlete, who took joy in competing, but always with humble good sportsmanship. He played on basketball teams in high school, and on Y-League teams for several years, as well as church-league softball teams. Mr. Adams had grown up a golfer, but became avid about the sport in the 1980s. He was a board member of the late Columbus Country Club, and in recent years, was an active member at Elm Lake.

Mr. Adams was also a proud and passionate supporter of his beloved Ole Miss Rebels. He rarely missed watching their football games, one of the only things for which he would skip his Saturday golf. He and his wife loved what they called their “tailgate days.”

Mr. Adams’ services will be Saturday, September 18th, at Memorial Gunter Peel Funeral Home, 903 College Street, Columbus, MS, 39701 (https://www.memorialgunterpeel.com). Visitation will be from 10:30 am-12:00 pm, with a funeral service following at 12:00 pm. In lieu of flowers, the family requests donations to the American Cancer Society.