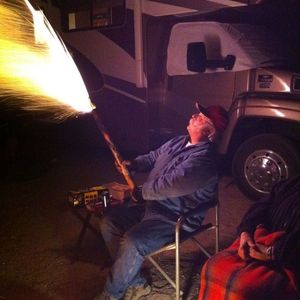 Back in our young teens through our 20's Bob and I were very close friends. We lived just a few blocks apart and the Dahlstrom family sort of 'adopted' me. We sure had a lot of great adventures together, often with motor scooters, bikes and cars. We "may" have even wrecked a few together! And there was nothing Bob could not fix or make faster. As the years rolled-on we remained in contact and in recent years sometimes met to go to car shows or hang out. Anybody that knew Bob knew...

Will miss my brother from another, RIP

Always a good time when we got together, dunes, lake, river or neighborhood. Rest In Peace our friend.

We will miss you our lifelong friend

Always a great neighbor and friend. You will be missed. RIP Bob

I will miss you my friend. Till we meet again rest in peace

He began working for the National Elevator Industry in 1970, following in his brother, Richard (Rick) Dahlstrom's footsteps. He retired from Amtech Elevator Services in 2014 after 44 years of service to the Union.

Bob met Doris Janelle (Wagoner) Dahlstrom in 1975. They dated on-and-off until they married in 1985. They took up residence in Janelle's home town of Covina. Their daughter, Kristy, joined the party in 1988.

In his free time, Bob enjoyed the outdoors. Camping, riding his quad, off-roading in his Bronco, boating and fishing were his favorite pastimes. He woke up each morning with a Bailey's & coffee in-hand ready for an early morning ride and ended the nights by the campfire. When not camping, he'd be out tinkering with something in the backyard.

After retirement, Bob and Janelle traveled extensively across the United States each summer in their RV. From Maine to Arizona, Florida to Vancouver – the two of them crisscrossed the country visiting friends and family everywhere. His favorite places they visited included Coos Bay Dunes in Oregon, the Union Pacific Steam Shop in Wyoming and Talladega Superspeedway in Alabama.

Bob passed away peacefully in his sleep on November 7, 2021 after living with COPD for 10 years. He is survived by his wife Janelle, daughter Kristy (Chris Cowan) and granddaughter Sabrina.

In lieu of flowers, please send donations to the COPD Foundation in Bob's name: https://www.copdfoundation.org/Take-Action/Donate/Tribute-Giving.aspx

A Celebration of Life will be held December 11, 2021. Please contact family for location and time.