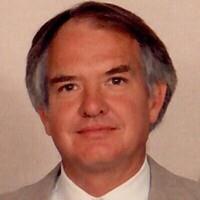 My condolences to you and your family . I pretty sure he made it to heaven . It’s hard to miss a tee time with God. And if you find a lost necklace or locket , you may have gotten a little help finding it .

Diane, may your heart soon be filled with wonderful memories of joyful times together as you celebrate a life well lived.

So sorry to hear this Diane. You and your family have our deepest sympathy. Prayers for comfort

He was a very kind and caring classmate! He will be missed by all that knew and loved him! A light has gone out in the world and Heaven has gained an angel! My heart goes out to his family - keeping them in my thoughts and prayers!

Dear Diane and Family,
I was so sorry to learn of your Husbands passing. Please know that I will keep you in my thoughts and Prayers. May GOD wrap His loving arms around each and every one of you! Stay strong
❤ Love and Prayers,
Joyce

Diane please accept my condolences.
May Robert rest in Peace.

Deepest sympathy to you, Diane and family. Prayers to you all for your loss.

Get email updates about Robert Moore delivered directly to your inbox.

Robert Allan Moore, Paxton, passed away September 22  at home from complications of Parkinson's Disease with Lewy Body Dementia. Per his wishes, he will be cremated. There will be no funeral or memorial services. Baier Family Funeral Services, Paxton, is handling the arrangements. Robert was born March 28, 1950, in Decatur, IL, the son of Vail and Helen Granger Moore. He spent his early years in Decatur and Gross Pointe Park, MI until his family moved to Paxton in 1958. He graduated from Paxton Community High School in 1968 and from the University of Illinois in 1972 with a degree in communications. After college he worked for a short time as a sports announcer at several area radio stations, later joining his father's business as a registered land surveyor . He owned and operated Moore Surveying & Mapping Inc in Paxton until 2016 when he retired due to his declining health.  He was preceded in death by his parents and his older brother, Timothy Moore. He is survived by his wife, Diane Johnson, whom he married in 1992, nephews Sean Moore and Brendan Moore, and step-daughters Jane Andrew and Jean Andrew. He was an avid sports fan of the Detroit Tigers and Chicago Cubs, Chicago Bears, Illini basketball and football, and PGA. He enjoyed skiing, playing golf, and dancing. He was a talented artist in drawing and watercolor. He loved his vocation and was constantly doing mental property surveys, even in his dreams. One could often catch him with one eye closed lining up an object with some other in the distance. He had eagle eyes that could spot wild asparagus and blackberries in ditches along the roads as his vehicle was speeding by them.  He was the epitome of a gentleman and could make anyone laugh. Robert was a staunch non-political advocate for freedom and liberty. He was a student of the founding fathers and early American history, and strongly supported organizations that educate people on the US Constitution and that fight court battles to ensure those freedoms endure. His dream, unfortunately never realized, was to open a freedom library, where people could come and educate themselves about liberty and hold in-depth discussions and debates about limited government, free markets, and libertarian issues. Memorials can be made to The Future of Freedom Foundation, The Institute for Justice, or The Parkinson's Foundation.