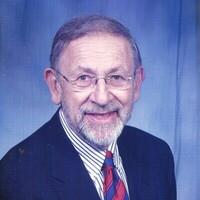 Robert was a great friend and colleague at College of DuPage. He was a man of great knowledge and wisdom. He was a guide to me as I pursued graduate school at NIU and later shared his knowledge and love of the Christian faith with me as I studied for the diaconate in the Episcopal Church. Bob's quiet ways and concern for others were admired by so many of us. I will miss him.

A gentle man and gentleman, Bob was my treasured older colleague at College of DuPage where his wisdom, kindness and scholarship enriched my early years of teaching, like Chaucer’s fabled character: gladly would he teach and gladly learn. He lived a long and rich life, and I was proud to know him.

Lovely person. I've known Bob since he hired me in 1970. I cherish our times together. He was a warm friend and a man of true integrity. Our love to the family.

Get email updates about Robert Warburton delivered directly to your inbox.

Born July 20, 1926 in Newark, New Jersey, Robert Warburton, a resident of Wheaton for 63 years, passed away on March 30. He was preceded in death by his first wife of nearly 52 years Wilma, and his parents, Phoebe Hoops Warburton and Edmund Warburton, and sister Alice Hooker (Paul, also deceased), all of Michigan. Robert, affectionately called Bob, was a college professor at USC, Wheaton College, Illinois Institute of Technology, and College of DuPage, where he also served as Provost.

Robert’s imagination has always been that of a storyteller.  Growing up during the Depression, he experienced this time of America’s history in both urban Newark, New Jersey and pastoral Pennsylvania, surrounded by a bevy of cousins as eager for urban and rural adventures as he.  A child of German immigrants and Welsh/English transported families, Robert’s earliest experiences were of identities proudly and courageously making their own stories into lives not merely surviving, but also dreaming.  Robert knew firsthand the stalwart glories and the rigorous traumas of WWII, serving as a Navy radioman in the seas off the coast of China.  Inspired by the resilience of the Chinese, he returned to this nation three times in his later years to teach English.  On two of these trips, he and his second wife, Mary Sheesley Warburton, collaborated as teachers of the English language, visual art, and narrative reading and writing.  Robert loved the adventure of travel throughout his life, at first within the United States driving a very young family across the desert and through the mountains of the west and midwest in their move from California to Wheaton. Western Michigan farmland, orchards, and small towns, with enticing proximity to dunes and beaches were summer havens for Robert and Wilma’s children on visits with beloved grandparents. Mackinac Island and Ernest Hemingway’s upper Michigan’s forests and lakes delighted him and Wilma in many sojourns throughout their life together. They enjoyed taking their youngest child, Janet Hughes, to England and France, where they visited his beloved aunt who had founded an orphanage in Chantilly, leading her children through the mountains to safety from the Nazis. A trip with Immanuel to Brazil moved Robert as both humanitarian and teacher. In addition to their China treks and work, Robert and Mary explored Kenya, England, and Sweden together.

Barely out of his teens, Robert returned home from the war to study at the University of Michigan, earning both a B.A. and M.A. in Literature. It was on a “moonriver” night in Ann Arbor that he stilled their rowboat and proposed to Wilma. Their friend circle was largely centered in Intervarsity, leading to life-long bonds with such treasured souls as Bob Brinck of Michigan. After completing a theological degree at Fuller Seminary in Pasadena, California, Robert and Wilma began their long life together in Wheaton. While teaching at Wheaton College, Robert was awarded the prestigious Danforth Fellowship to pursue his PhD studies at The University of Chicago, writing his dissertation on the literatures of fantastical realism.  Teaching literature of the 19th and 20th Centuries to college students over many years gradually gave way to a specialized scholarship in the wilderness landscapes and minimalist prose of Hemingway as well as other short story authors. For several years, Robert was an active scholar at the Ernest Hemingway Foundation in Oak Park, Illinois. The waiting lists to enroll in his courses on short story, film, and poetry at Wyndemere became legendary. His children and grandchildren always begged him for stories and poetry, a favorite character being Beepo the clown. Several of Robert’s stories and poems are published in a volume, Walking on Water (2016). For the past two years, he has been working on a new series of stories, spawned by his recollection of his father’s scheme at age 13 to join the army in 1917 when the U.S. forces declared war on Germany in WWI.

Robert was a man of deep faith and found many avenues for growth and sustenance in his love for God in Immanuel Presbyterian Church in Warrenville. Serving and leading with his fellow parishioners in countless ways, Robert taught Sunday School and Bible School, and served as an Elder for years in this faith community of so many treasured friends.

Robert was a man of rollicking fun as well. He loved art of all kinds, especially gardening, painting and theatre. Several years ago, he and Mary enjoyed starring roles in a Wyndemere production of The Music Man as one of many ways they actively participated in their home community.

A family service will be held in early May, while a larger funeral, in a time hopefully beyond the worst of covid, is being planned to take place at Immanuel Presbyterian Church in late August or early September, followed by a private burial in Hart, Michigan. For updates, please refer to the website of Hultgren Funeral Home: hultgrenfh.com.

In lieu of flowers, memorial gifts may be directed to Immanuel Presbyterian Church (immanuelpresbyterian.net); Intervarsity (donate.intervarsity.org); and The Nature Conservancy (support.nature.org).