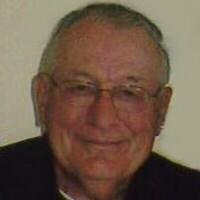 The volunteers, flight team and board of Badger Honor Flight mourn the loss of their hero, Ronald Christian. We are thankful for his military service and proud to have served him on his trip to Washington, D.C. on May 16, 2015.

We are saddened to hear of Ron’s passing. Please know we are thinking of your entire family as you make your way through this loss and hope that all the wonderful family memories will fill your hearts! Our sincerest condolences. Neal, Sue and Harold Tessmann

Our encouragement to honor Ron for his military service and gratitude for his enriching life. an ancient poem to honor his passing .../Users/belongie/Documents/Mike's Stuff/Tis a Fearful Thing.docx

Get email updates about Ronald Christian delivered directly to your inbox.

Ronald was born on February 9, 1931, along with a twin brother on the family farm in Cambria, Wisconsin, weighing in at 2-1/4 pounds. He went to the grade school in rural Cambria and graduated from Randolph High School. He served in the Korean War in 1952-1953, and belonged to the Randolph VFW. He was a life-long member of Trinity Lutheran Church and was a member of the church council and choir. On October 23, 1954, he married Doris Wang at Trinity Church in Friesland.   He was employed by Busse Brothers in Randolph for 20 years and then for John Deere in Horicon until his retirement in 1992. After retirement, Ronald worked as a handyman. He could fix most things and enjoyed tinkering with his Jeep and restoring his prized Graham-Paige car. He was always willing to help his farming neighbors with welding projects. He and his wife went on many trips with his cousin and good friends, Norman and Bernadine. Ron liked to visit with everyone he met. He enjoyed watching the local high school basketball games even after his children graduated. You would often find him at the Beaver Dam races or cheering on the Brewers, Packers or Badgers.

A private funeral service will be held at Trinity Lutheran Church in Friesland with Pastor John Hildebrandt officiating. Burial will be in the Friesland cemetery.

A special thank you to the Randolph Health Services and the hospice nurses, Rita and Marita, for their good care. Thank you to neighbor Dale Bahr for picking up snow plowing the past several years and the other neighbors who were always there to help when needed.

A memorial fund has been directed to Trinity Lutheran Church in Friesland or to Alzheimer’s Association.