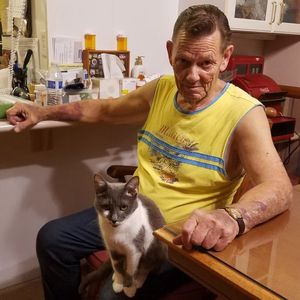 Ronnie will be missed by many who knew him. He was so much fun to be around and was always upbeat. He could carry on a conversation with you on any topic. We will miss his visits to our home when he was in the area. Rest in peace Ronnie, we will never forget you and your generosity.

You will truly be missed. We wish Fran and the family the very best support and healing at this time.

Our condolences to you and your family. May he Rest In Peace and his memoirs be eternal

Ronald my Good teacher ,my good friend i will miss you and i allways remember your favorite words
Superior Attitude and a Superior State of mine RIP ...

A beautiful soul has left us. His spirit will always be around people he touched. He will be sorely missed by all who knew him. May god rest his soul in peace. Amen

Dad,
I miss you more than words can say. You WILL 'live forever' in our hearts. Thanks for everything and for waiting to see Mom, the kids & I. If you don't mind though, can you please pass on some of your strength and a bit of your 'luck.' P.S. Smile & say hi to all of the kitties!
Love you always, Chrissie

Ron Dennis, born in Chicago to Eli and Winnifred (nee Lowe) Dennis, was one of nine siblings, 8 boys and one girl.

Ron, Fran and Christine moved from Chicago to California in August, 1985 as a result of ARCO pulling out of the Midwest. Both Ron and Fran worked for the company. He started his own business, TRON Maintenance repairing service station equipment that same year and ran a successful operation for many years.

He enjoyed having parties at our house. Halloween was a big event. He built a stage over the pool for the band and loved having everyone over. Ron built a train layout on the back patio for Maxwell, a little house for Emily and a 'Titanic' that held the kids afloat in the pool, along with a dock.

Traveling was sometimes 'forced,' but Fran got him to Egypt, England and Italy. He loved to gamble and 'willingly' went to Las Vegas and later Indian casinos in California where he was luckier than most.

Ronnie will forever be remembered for his kindness and generosity, caring presence, humor and determination. He would go to great lengths to help anyone in need. Ron was a great friend and a giving person that thought of others more than himself.

He is sorely missed by everyone whose lives he touched. Ron would want you to celebrate his life; not with sorrow, but with cheer and his ever present humor. He had a couple favorite sayings - 'Think Positive' and do it with a 'Superior Attitude and a Superior State of Mind.'... and 'SMILE!'