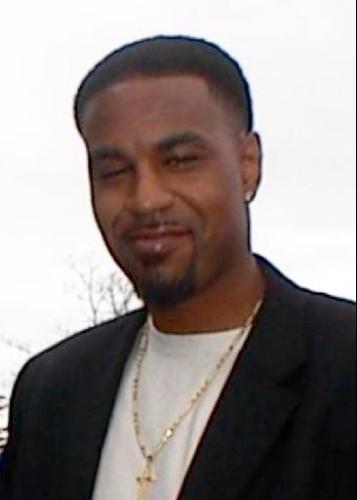 I had the honor and privilege of being Roy's English teacher at Dolan Middle School. I am happy to remember that I told him that even while he was a young student. It was not only because he was a good student in my class but a good kid; kind, respectful and a funny guy that brought cheer, joy, laughter to our class, many times when I was at my wits'end trying to get across something as simple as a participle phrase. His memory lingers and to know that he was serviced by yet another wonderful...

I was just talking and thinking about you the other day.
I know you watching over everybody
And I thank you for that!
RIH Roy

You are truly missed!!

Roy Marble, BJ Armstrong,Brad Lohaus, Kevin Gamble, Jeff Moe, Ed Horton, Gerry Wright et al. What an incredible bunch of athletes. Rest in peace Roy you and your brothers will live on in our hearts forever.

You will be missed by many. No more suffering my friend. My prayers go out to your family. I will remember all the fun times. Class of 85 Love RIH

My prayers go out to you all, I worked for Roy at Legends we had quite the relationship never a dull moment he was a good man more so long distance kin folks we treated each other. I am going to miss Roy.

My Condolences go out to the Marble Family and Carla Brown-Marble, Royonah Marble, Roichelle Marble, and Carlo Marble. I pray that God keeps you all in his everlasting arms. Love you guys and see you all soon. Love Mia Robinson and Family in Minneapolis, Minnesota

I want to say to Roy Marble's family thank you for sharing Roy with us. I went to Beecher, and I was a fan. I loved to see him play. Although I never really had a conversation with him, that made no difference to me. I have had many debates over which Flint player was a better player. I felt Roy was. I know Theresa and she always remembered me whenever we seen each other. I know Roy has several children, and I hope I get to see them play when they are on tv. Losing a parent is the hardest...

Get email updates about Roy Marble, Jr. delivered directly to your inbox.

MARBLE, Mr. Roy L., Jr.-age 48, of Grand Blanc, passed away Friday, September 11, 2015 at his residence. Funeral services will be held 11:00 am Saturday, September 19, 2015 with an 10:00 am family hour at New Jerusalem Full Gospel Baptist Church 1035 E. Carpenter Rd. Flint, MI 48505. Bishop Roger L. Jones, Sr. officiating. Elder Patrick W. Sanders, Sr. host pastor. The final resting place for Mr. Marble will be Crestwood Memorial Cemetery, Grand Blanc, MI. Calling hours are 10:00 am - 5:00 pm Thursday, September 17, 2015 at Sheldon T. Banks Funeral Chapel afterwhich, he will be taken to Beecher High School Auditorium 1020 W. Coldwater Rd. for a charity benefit 6:00 pm - 8:00 pm. Mr. Marble will lie instate at Greater Holy Temple COGIC 6702 N. Dort Hwy. Flint, MI 48505 Friday, September 18, 2015 from 8:00 am - 8:00 pm with family present from 4:00 pm - 6:00 pm.Roy L. Marble was born in Flint, Michigan on December 13, 1966 to the parents of Roy Marble, Sr. and Mother Bertie Marble. Roy loved spending time with his children and family, and they loved and adored him as well. He and his family enjoyed a strong bond that transcended physical boundaries. Roy and his family remained close throughout his many endeavors that may have taken him away from his beloved family and hometown. Whenever possible, Roy and his family, or ?Bugg?, as they affectionately called him, enjoyed many outings, family dinners and of course watching sports or attending games together, whenever he was able to visit. Roy Jr. departed this earthly life on Friday, September 11, 2015 at his home in Grand Blanc, MI. Although Roy received Christ at an early age; he rededicated his life to Christ in 2014, continued to attend services as his health permitted, and remained in positive spirits throughout his struggle. Throughout his childhood, he attended the Beecher Community Schools and graduated from Beecher High School in 1985. Upon his graduation, Roy attended the University of Iowa, where he continued to pursue his ?first love?: basketball. It was once said that as a youth, Roy ?ate, slept, and dreamt? basketball. At the University of Iowa Roy was a letterman from 1985-89, and he scored 2,116 points in 134 games to become the only Iowa player to score more than 2,000 points. He also recorded 668 career rebounds and 281 assists as the Hawkeyes posted an 89-37 record during his career. With Roy on their team, Iowa earned four straight NCAA Tournament appearances, including an Elite Eight appearance in 1987 and a trip to the Sweet 16 in 1988. After playing four seasons at the University of Iowa from 1985 to 1989, Roy left the college as Iowa's all-time leading scorer and he was selected by the Atlanta Hawks in the first round of the 1989 NBA Draft, playing for the team during his rookie year. Throughout his career, Roy has also played for the CBA as well as the NBA; last signing with the Denver Nuggets. However, his children became the new love of his life, as he welcomed his beautiful children Roy Devyn, Royonah, Roichelle, Carlo, and Merrick into the world. Roy passed on his basketball legacy through his children as they embraced his love for the game. He and son Roy Devyn would go on to become the first father-son duo in Big Ten basketball history to each score 1,000 points, both at the University of Iowa.After ending his professional basketball career, Roy settled in Iowa where he became the owner and proprietor of Legends Sports Bar and Grill before his health began to decline. Marble's longtime friend, Terence Greene stood by his side throughout flying to Iowa to assist him. Later, Roy came home to Grand Blanc where his loving family cared for him. Roy?s battle with his health did not damper his love for life. He would often be seen cheering his children on at games, cheering on his alma mater, Flint Beecher or spending time with loved ones, having his favorite meals and drinks, he couldn?t get enough of caramel frappuccino from Starbucks; and sharing a joke or two. At Beecher, Marble was a McDonald's All-American who earned all-state honors, win four Big Nine championships and a state championship as a senior with a perfect 27-0 record in 1985. He entered the Greater Flint Area Sports Hall of Fame in 2005 and in 2014; he was inducted into the Greater Flint Afro-American Hall of Fame. Roy leaves to cherish his loving, compassionate memories to his beloved children, sons, Roy Devyn Marble of Orlando, FL, Merrick Marble of Texas, and Carlo Marble of Des Moines, IA; daughters, Royonah Marble of Lawrence, KS, and Roichelle Marble of Madison, WI; father, Roy Marble, Sr.; sisters, Theresa Marble, LaShema Marble all of Grand Blanc/Flint area and brother, Jeron (Sarita) Marble Sr. of Dimondale, MI; uncles, LaVern Alexander of North Carolina, Ronald (Ruthie) Alexander and Randell (Georgia) Alexander of Muskegon, Lee Marble of Washington DC, Frank Marble and Thomas Marble of Flint, Sam (Rosie) Marble, and Larry (Shawanda) Marble of Muskegon, MI; aunts, Mary E. (Rudolf) McCarty of Flint, Ruthie Mae Marble of Joliet, IL, Jean Green, Dorothy Marble and Renee Marble of Muskegon, MI; nieces, BeYonce Solomon and Diamond Marble of Grand Blanc, MI; nephews, Jeron Marble Jr. of Orlando, FL, Phoenix Marble of Dimondale, MI, Troy Marble and Joshua Marble of Flint, MI; and a host of beloved special cousins ?you know who you are; and special friends Terrence Greene, Glen Rice, Ray Lynch, Rich Willock, Oran Holmes, Brian Smith, Kendra Dickerson, Marjorie Chapman; Iowa Hawkeye Teammates: Ed Horton, Kevin Gamble, Bill Jones, B.J. Armstrong; and special thanks to Roy?s adopted family the Albrights of Iowa, Barbara Taylor, Kim Vondracek and family for your presence in Roy?s life. Roy was preceded in death by his dear mother Mrs. Bertie Marble; grandfather, Willie Gray; grandparents, Elisha and Christiana Alexander; three uncles, Glenn Gray, Donald and Ray Alexander; cousin, Torrey Day; and aunt, Dorothy Marble.