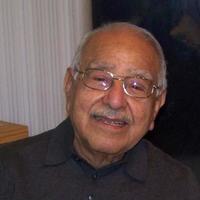 Ruben will be deeply missed. We just found out today of his passing. We knew Ruben and Anne through St.As and loved them both very much. I know they are together now and are having a joyous reunion. They were great people and will be sorely missed. God bless your wonderful family!

So sorry for your lost,Our prayers are with you.

I knew the Calvillo family since I was about seven years old. They were our neighbors when we both lived on 25th and Homan Ave in little village. We kind of grew up with them . I am sorry for the loss of your Father, Grandfather, father in law, Great Grandfather uncle, and friend. I will keep him in my prayers.

Alyssa- I am so sorry for your loss; I know how special grandfathers can be! He will be your angel now as you begin your married life. God Bless
Love,
Aunt Di

Get email updates about Ruben Calvillo delivered directly to your inbox.

Ruben Calvillo, 92, of Villa Park, IL, loving husband of the late Anna (née Robles), passed away peacefully on December 30, 2019. Born in Chicago, September 1927, he was the third of eleven children born to Joseph and Mary (née Jaso) Calvillo. Cherished father of Annette Weihman (late Michael) and the late Ruanne Vasquez (John). His strong spirit will be carried forever in the hearts of his grandchildren Anthony M. Moreno, and Alyssa (Jason) Nichols. Much loved Great Grandfather of Mikayla, Olivia, AJ, and Shelby Moreno. Fond brother, godfather, uncle, and friend to many. Ruben "Papa" was a proud Navy veteran, serving during World War II and stationed in Japan in 1945. Growing up in his large family, Ruben learned the value of hard work. An attribute that became a cornerstone of his character. Some of his fondest memories of his youth in Chicago include time on the ball field at Fuller Park on 47th Street and celebrating with family and neighborhood friends at Berger's afterwards. When he returned from serving his country, a friend introduced Ruben to Anna Marie Robles. He would later explain that he fell in love with her at first sight. Married at 21, Ruben began his career at John F. Cuneo publishing as a bookbinder and later machine operator. Throughout his 40+ years there he made countless friends and earned the nickname "El Profesor". Ruben's education extended beyond his formal schooling encompassing his interests in history, language, culture, and music. His passion for music developed early and was fueled by the pleasure he found in bringing people together. A self-taught guitarist, his strings served as Ruben's voice. Together, he and Anna told many stories and shared heart-felt emotions with family and friends through song. Upon Anna’s passing, that voice was silenced for 12 years, until, Christmas 2018; when once again, family inspired him to speak, through his Granddaughter's new guitar. A man who took great pride in his family, Ruben wasn't afraid to share his feelings. Last month, while coming to terms with declining health and adapting to a new environment, he made sure to tell each person at the table how proud he was of their efforts and achievements in life. He encouraged everyone to reach beyond themselves spiritually, specifically recommending attending church, of any kind, to get a sense of something bigger than oneself.  That Thanksgiving moment wasn't just special for the family, but inspired an employee of Clarendale to respectfully interrupt to tell Ruben what a special man he was and what a wonderful family he had created. If the measure of a man is how he is remembered by those with whom he lived, thoughts of Ruben will be summoned often and by many. Whether in the sweet sounds of a guitar, a kind word of encouragement, or the soft pat of a hand, he will remain with all who loved him. Like the smile on his face when opening a cerveza fría on a warm day, thoughts of him will refresh the soul.  Visitation will be held Friday, January 3, 2020 from 3 - 8 PM:Steuerle Funeral Home 350 South Ardmore AvenueVilla Park, IL 60181 Mass of Christian Burial will take place Saturday, January 4, 2020 at 10:15 AM:St. Alexander’s Catholic Church300 South Cornell AvenueVilla Park, IL 60181 With internment to follow:St. Mary’s Cemetery87th Street & Hamlin AvenueEvergreen Park, IL 60805  Ruben spent his final days in the care of Clarendale of Addison and Heartland Hospice. The family wishes to thank both organizations for going above and beyond in their service. For donations in memoriam of Ruben, please go to the American Heart Association website @www.heart.org.